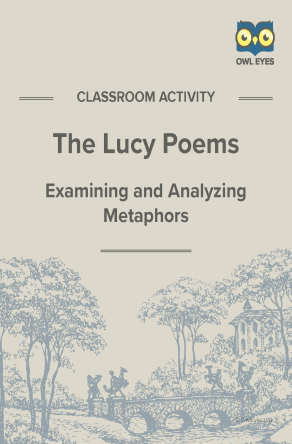 Wordsworth’s five Lucy poems, written between 1798 and 1801, focus on the speaker’s love for a beautiful young English woman; the speaker idealizes Lucy and mourns her untimely death. Whether Lucy was a real person in Wordsworth’s life or an entirely imagined character is often the subject of critical debate; some critics interpret Lucy as symbolizing Wordsworth’s muse and her death as representing the poet’s fear of losing his poetic inspiration. The poems feature numerous elements of romanticism, which became a major literary movement in 19th-century English literature. While exploring the speaker’s emotional life, the poems emphasize Lucy’s beauty, the beauty of nature, and the presence of death.

The Owl Eyes Analyzing Metaphor worksheet gives students an opportunity to practice examining and analyzing metaphors. Students will engage with specific selections of the text and work collaboratively to identify the vehicle, tenor, and implications of each metaphor. The main components include the following:

In completing this worksheet, students will learn to classify and analyze different kinds of metaphors in order to develop close reading skills and draw deeper inferences from the text.