Are you a teacher? Subscribe today to access hundreds of premium teaching resources and lesson plans! close
close
close
close
« Library « Poetry « The Passionate Shepherd to His Love 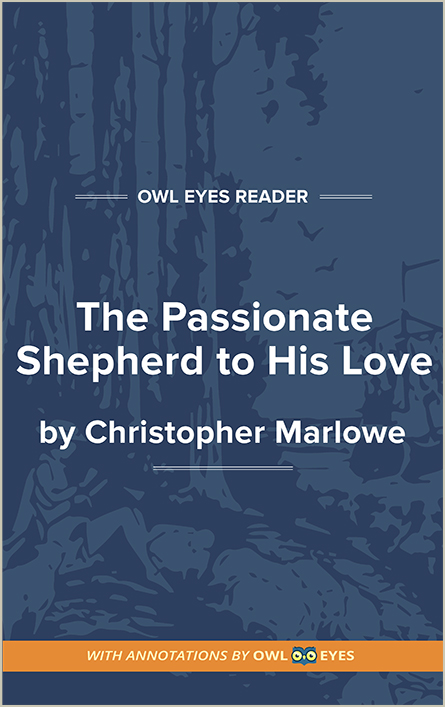 The Passionate Shepherd to His Love

Christopher Marlowe’s “The Passionate Shepherd to his Love” is one of the most famous pastoral poems in English literature. The poem takes up the tropes of the pastoral, a literary genre adopted from Greek literature. Pastoral poetry idealizes the countryside as a reaction to the complexities and stresses of city life. It generally involves a simple, artistic shepherd in an Edenic paradise unspoiled by time or society. The speaker of Marlowe’s poem is a shepherd who implores his beloved to “come live with [him] and be [his] love.” The shepherd paints a beautiful vision of the idyllic life they will share with one another: watching sheep from rocks near a stream, listening to birds sing harmoniously, watching swains dance in the May morning. He evokes for his beloved an innocent paradise, promising her clothing made out of flowers and a “bed of roses.” Yet the audience is left without the lover’s reply. Sir Walter Raleigh, a contemporary and friend of Marlowe’s, crafts a clever, cutting response in his famous poem “The Nymph’s Reply to the Shepherd. Read together, the two poems offer a broader picture than the pastoral fantasy Marlowe’s shepherd creates. With his harsh, realistic vision of the world, Raleigh reveals Marlowe’s poem to be a mere illusion, a pastoral dreamscape.