Are you a teacher? Subscribe today to access hundreds of premium teaching resources and lesson plans! close
close
close
close
« Library « Fiction « The Sport of the Gods « Summary 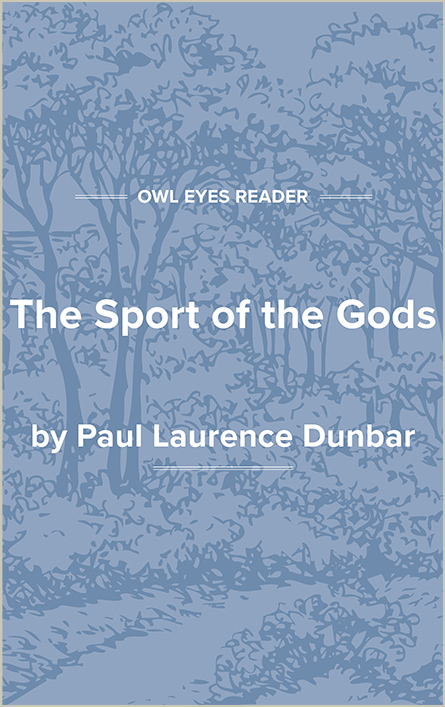 The Sport of the Gods is Paul Laurence Dunbar’s last novel and in many respects his best. It is the story of the destruction of the Hamilton family, who fall from their status as relatively stable sharecroppers in an unnamed southern city to imprisonment and degradation in New York City. The novel combines the conventions of naturalism and sentimental fiction to give readers one of the first descriptions of the effect of city life on African Americans.

The first chapters of the novel describe the idyllic life of Berry and Fannie Hamilton and their two children, Joe and Kitty. Berry and Fannie are the trusted servants of the wealthy white Oakley family, former slave owners who have managed to regain some of the wealth they lost during the Civil War. The happy arrangement is soon lost, however, when Francis Oakley, the dilettante artist half brother of Maurice Oakley, reports the theft of nearly a thousand dollars from his room. Suspicion immediately falls on Berry, who has recently deposited a large sum of money in the bank. The narrator reports caustically the observations of many of the local whites, who believe that African Americans could become wealthy only through theft. After a speedy trial, Berry is sentenced to ten years of hard labor in prison.

This sudden overturning of the southern romance plot is continued through the relocation of the three remaining family members, Fannie, Joe, and Kitty, to New York City. Hoping to escape the persecution associated with being related to a convict, they rent rooms in a boardinghouse and attempt to hide their family history. Things go well at first; Joe Hamilton finds employment in his trade as a barber, and Kitty Hamilton’s singing talents soon secure her a prominent role in a musical revue. Despite Fannie’s protests against her children’s habits, Joe and Kitty’s first impression of New York is positive.

Things begin to fall apart, however, when Joe falls under the sway of the hedonistic crowd associated with the Banner Club, a biracial social club and watering hole. True to the tenets of naturalistic fiction, Joe soon changes from a competent young man to...