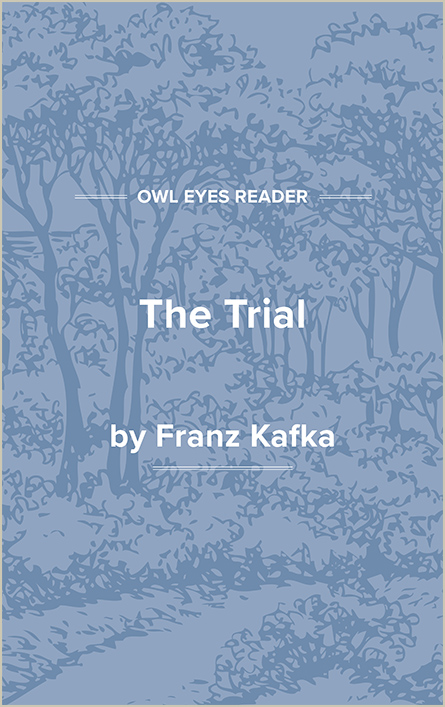 Franz Kafka (KAHF-kah) is one of the key figures in modern literature, the prophet of alienation, existential angst, Freudian guilt, and the tragicomic failure of the human quest for spiritual fulfillment. He was born in 1883 to a domineering father, Hermann Kafka, and an unassuming, introspective mother, whose maiden name was Julie Löwy and whose quiet inwardness he inherited. He resided until his thirty-first year with his parents and in the shadow of his father’s intimidating presence. Most of his literary achievements, despite their having become requisite to any study of twentieth century Western literature, are fragmentary and incomplete—like his life, one could say, which was marked by four inconclusive love affairs and a debilitating illness that brought him to an early death in his forty-first year. Neither of his younger brothers survived infancy, and his three younger sisters (Ottla, Elli, and Walli) all died in Nazi concentration camps.

His father enrolled him in the German, not the Czechoslovak, schools in Prague for his early education, the choice being dictated, in Czechoslovakia’s prerepublican days, by the more promising prospects in professional advancement consequent upon such an education. At the age of eighteen, Kafka was a student at the German University in Prague; there he began his friendship with Max Brod, who was to nurture his literary career and become his literary executor, his editor, and his biographer.

At the university, Kafka turned to the study of law and the avocation of creative writing. He received his law degree two weeks before his twenty-fourth birthday, and on October 1, 1907, he began work with the Assicurazioni Generali, an insurance company in Prague. With Brod’s insistent help, some of his early writings were published in periodicals. Three of his more ambitious early undertakings in fiction were never completed but were eventually published. “Der Verschollene” (lost without trace) was published in its incomplete state as Amerika in 1927. The first chapter of “Der Verschollene” had been published as a short story, entitled “Der Heizer” (the stoker), in 1913.

In Kafka’s most famous piece of writing, The Metamorphosis, Gregor Samsa awakes to find himself transformed into a gigantic insect. The violence visited upon the insect-Gregor by his father is consistent with the paternal hostility that is drawn in The Judgment: In this story, Georg Bendemann’s engagement to Frieda Brandenfeld is to be announced by letter to a friend in Russia, who is the mundane Georg’s artistic alter ego; when Georg informs his moribund father of his intent to send the letter, the father, reinvigorated by resentment, pronounces the judgment requiring Georg to drown himself. Georg all but voluntarily carries out the sentence.

Kafka’s early prose is not only illustrative of his antinaturalistic style but also virtually explicit with the two major psychological inhibitions of his life: his sense of being irrevocably intimidated by his father and his inability to overcome his indisposition to marriage. These inhibitions and their interrelationship constitute the subject of his autobiographical letter to his father, written in 1919 but never actually delivered to or, presumably, read by Hermann Kafka. The letter informs its nominal recipient of his responsibility for his son’s anxiety, guilt, and sense of failure, all of which precluded the possibility of a confident entry into marriage.

Although never married, Kafka was twice engaged to Felice Bauer—who appears as Frieda Brandenfeld in The Judgment and as Fräulein Bürstner in The Trial —and twice broke the engagement. In 1917, the year of his second broken engagement to Bauer, he received diagnostic confirmation that he was suffering from tuberculosis; he also worked on and completed many of his stories and parables at this time, including “The Country Doctor.” During the next two years, he met and became engaged to Julie Wohryzak in...