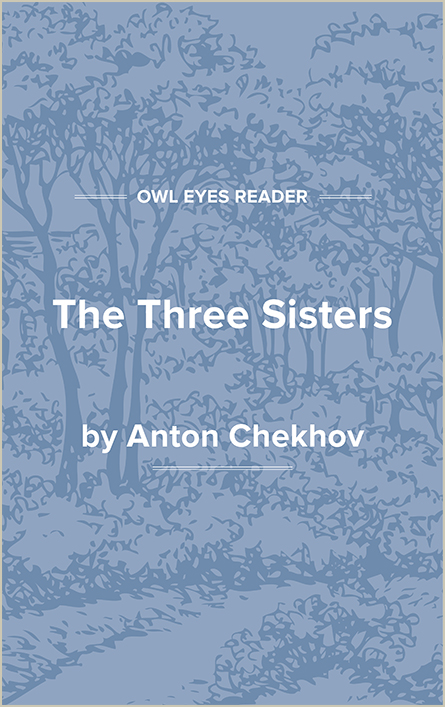 [In PROSOROV'S house. A sitting-room with pillars; behind is seen a large dining-room. It is midday, the sun is shining brightly outside. In the dining-room the table is being laid for lunch.]

[OLGA, in the regulation blue dress of a teacher at a girl's high school, is walking about correcting exercise books; MASHA, in a black dress, with a hat on her knees, sits and reads a book; IRINA, in white, stands about, with a thoughtful expression.]

OLGA. It's just a year since father died last May the fifth, on your name-day, Irina. It was very cold then, and snowing. I thought I would never survive it, and you were in a dead faint. And now a year has gone by and we are already thinking about it without pain, and you are wearing a white dress and your face is happy. [Clock strikes twelve] And the clock struck just the same way then. [Pause] I remember that there was music at the funeral, and they fired a volley in the cemetery. He was a general in command of a brigade but there were few people present. Of course, it was raining then, raining hard, and snowing.

IRINA. Why think about it!

[BARON TUZENBACH, CHEBUTIKIN and SOLENI appear by the table in the dining-room, behind the pillars.]