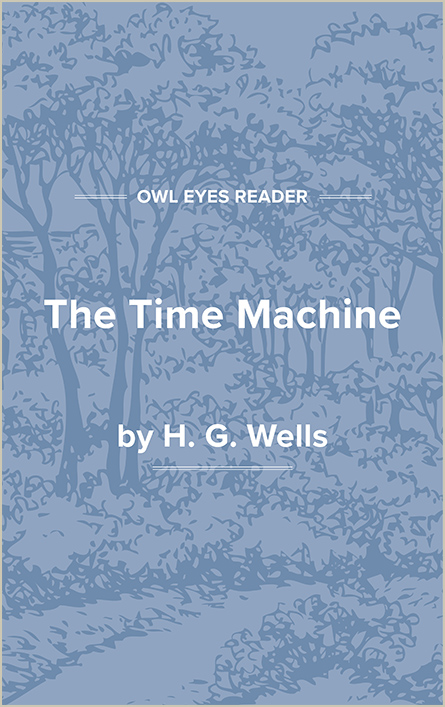 One evening after dinner with friends at his home, the Time Traveler leads the discussion to the subject of the relationship between time and space. It is his theory that time is a fourth dimension, and he believes that this concept can be proved. To the astonishment of his guests, he exhibits a small model of his Time Machine and declares that it can travel backward or forward in time. One of the guests is invited to touch a lever on the model, and, to the amazement of all, the machine disappears. The Time Traveler explains that the instrument is no longer visible because it is traveling into the past at such great speed that it is below the threshold of visibility.

The following week, the Time Traveler is not at home to greet his dinner guests when they arrive, but he has left word that they are to proceed without him. Everyone is at the table when their host comes in, dirty from head to toe, limping, and with a cut on his chin. After he has changed his clothes and dined, he tells his friends this story of his day’s adventures.

In the morning, he seats himself in his Time Machine and activates the mechanism. As he reels through space in the machine, he sees days shoot past him like minutes, and the rapid alternation of light and darkness as the sun rises and sets hurts the Time Traveler’s eyes. Falling from his machine when he brakes too suddenly, he finds himself on the side of a hill. In the misty light, he can see the figure of a winged sphinx on a bronze pedestal. As the sun comes out, the Time Traveler sees enormous buildings on the slope. Some figures are coming toward him, one of them a little man about four feet tall. Regaining his confidence, the Time Traveler waits to meet this citizen of the future.

Soon a group of these creatures gather around the voyager. Without a common language, he and his new acquaintances have to communicate with signs. After they have examined the Time Machine, from which the traveler has had the presence of mind to remove the levers, one of them asks him through gestures if he has come from the sun.

The creatures lead the Time Traveler to one of the large buildings. There he is seated on a cushion and given fruit to eat. Everyone in this civilization is a vegetarian, as animals have become extinct. When the Time Traveler has eaten, he unsuccessfully tries to learn his new friends’ language. These people, who call themselves the Eloi, are not able to concentrate for long without tiring.

Free to wander about, the Time Traveler climbs a hill, and from the crest he sees the ruins of an enormous granite structure. Looking at some of the Eloi who are following him, he realizes that they all wear similar garb and have the same soft, rounded figures. Children can be distinguished from adults only by their size. The Time Traveler realizes that he is seeing the sunset of humanity. In the society of the future, there is no need for physical or mental strength. The world is secure and at peace, and the strong of body and mind would only feel frustrated.

As he looks around to find a place to sleep, he discovers that his Time Machine has disappeared. He tries to wake the people in the building in which he had dined, but he succeeds only in frightening them. At last, he goes back to the lawn where his machine had been and there, greatly worried about his plight, falls asleep.

The next morning, he manages to trace the path the Time Machine made when it was dragged away from where he had left it. The path leads to the huge pedestal base of the sphinx, but the bronze doors in the pedestal are closed. The Time Traveler tries to communicate to some of the Eloi that he wishes to open the doors, but they answer him with looks of insult and reproach. He attempts to hammer in the doors with a stone, but he soon must stop from weariness.

Weena, a young woman the Time Traveler has rescued from drowning, becomes his friend and guide. On the fourth morning, while he is exploring one of the ruins, he sees eyes staring...