Are you a teacher? Subscribe today to access hundreds of premium teaching resources and lesson plans! close
close
close
close
« Library « Poetry « To My Dear and Loving Husband 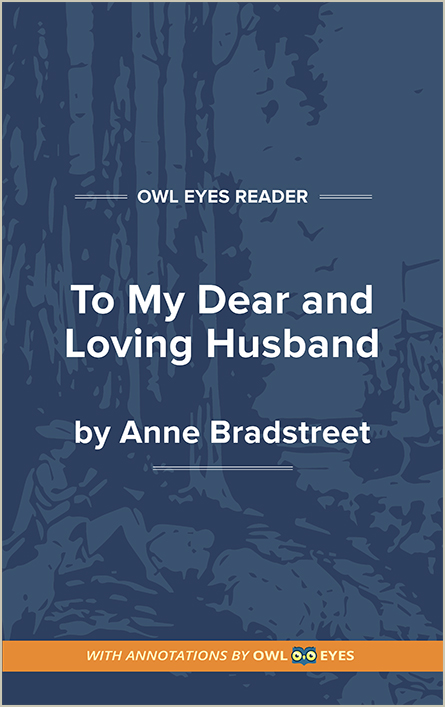 To My Dear and Loving Husband

As the first poet and female writer to be published in the American colonies, Anne Bradstreet remains one of the most important American poets. The sheer volume of her work is impressive, and the themes explored within her works have contributed to her continued recognition as an accomplished female writer. As a woman of puritan faith, much of her writing is influenced by spirituality. However, she also challenged pre-existing beliefs about certain religious traditions and ideologies, and many of her writings highlight her conflicting feelings about godly love, redemption, and salvation. Bradstreet’s poetry also frequently explores the roles of women, and how spirituality and emotions conflicted in these roles. “To My Dear and Loving Husband” is arguably one of these conflicting poems, as it consists of twelve lines that romanticize a married couple’s devoted and passionate earthly love, a practice not supported by the puritan faith, as earthly attachments supposedly interfere with godly love. However, Bradstreet’s poem suggests the profound happiness that can be achieved in earthly love and that partners should strive to create a marriage modeled after eternal, godly love.