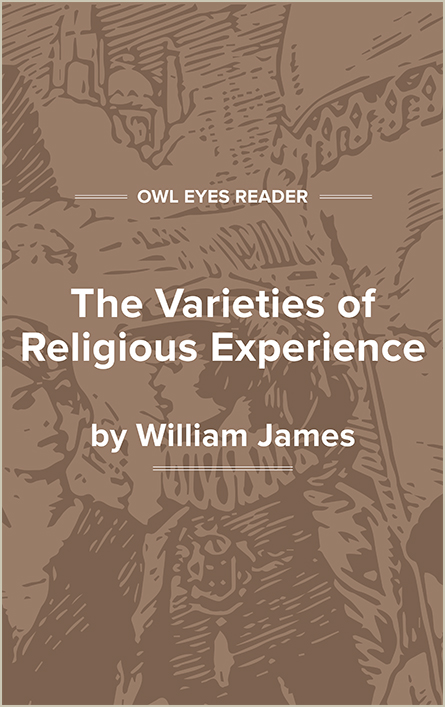 Philosopher William James’s The Varieties of Religious Experience is based on a series of twenty Gifford lectures he delivered at the University of Edinburgh in Scotland, beginning in May, 1901. James was asked to discuss natural religion, which traditionally had been conceived as a discipline on the border between philosophy and theology. As such, natural religion was thought to exclude both the notion of divine revelation and any claim of tangible religious experience. James’s own concept differed in looking not at God as an object of devotion but at human attitudes toward God, including belief, supplication, direct experience, and doubt and disbelief. The word “varieties” in the book’s title indicates James’s intention to catalog and evaluate the range of religious experiences accessible to different human faculties. Indeed, James denies that there is only one “religious sentiment.”

The invitation to lecture in Edinburgh left James both exultant and humbled, as he admitted in his first address: “It is with no small amount of trepidation that I take my place behind this desk, and face this learned audience.” James’s characteristic modesty aside, the magnitude of the subject, even in a twenty-lecture format, was daunting. His initial plan was to devote ten lectures to descriptive, or psychological, examination and the remaining ten lectures to metaphysical considerations based on his philosophical studies. Though a professor of philosophy at Harvard University, James had studied psychology and had also earned a medical degree. He had spent so much time on the psychological aspects of religious experience that he had little time left for the metaphysical, aside from his brief conclusions about the distinctive qualities of the religious life.

James begins his study by examining testimony about religious experience. He thinks his investigation would be most fruitful if confined to religious pioneers rather than to those who have followed their teachings. James identifies two different questions one must ask about the articulation of religious experience: What is its origin, and what is its significance or value? For example, while affirming that the Bible has great spiritual value, one might ask under what “biographic conditions” and states of mind its authors contributed to it. James attacks the common failure to make this distinction, a failure that can lead some to dismiss the value of religious thinking because of a thinker’s flaws. Similarly, he notes that Quakerism is a highly admirable faith, but quotes at length from the journal of its founder, George Fox, to show “pathological aspects” in Fox’s thinking. However, declares James, Fox’s mental instability should not negate the significance of the Quaker faith, which, indeed, “is impossible to overpraise.” James also points out that one can just as readily find mental and physical defects among atheists and agnostics, for example.

James then questions the meaning of the divine, as conceived by human beings, and asks what constitutes a religious experience. He wishes to avoid an excessively narrow definition, for “There are systems of thought which the world usually calls religious, and yet which do not positively assume a God.” Buddhism, for example, has been called a “hopeless” or “atheistic” religion; and the Transcendental philosophy of Ralph Waldo Emerson “seems to let God evaporate into abstract Ideality.” For James, the divine is “the first and last thing in the way of power and truth. Whatever then were most primal and enveloping and deeply true.”

On the question of what makes a religious experience, James asserts that the religious attitude is a “solemn and serious reaction” to the divine as he defines it. The religious attitude can engender a happy state of mind that does not, however, represent an escape from the pain of life but embraces and overmatches the sense of tragedy. Moreover, the religious...