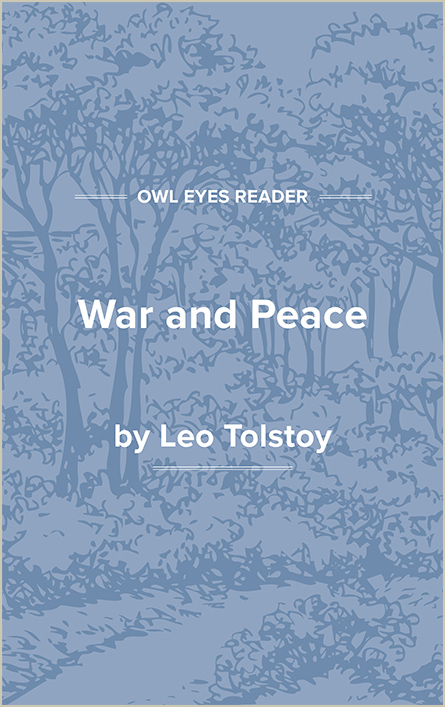 In 1805, it is evident to most well-informed Russians that war with Napoleon is inevitable. Austria and Russia join forces at the Battle of Austerlitz, where they are soundly defeated by the French. In the highest Russian society, however, life goes on as though nothing of tremendous import were impending. After all, it is really only by a political formality that Russia has joined with Austria. The fact that one day Napoleon might threaten the gates of Russia seems ridiculous. Soirees and balls are held, old women gossip, and young women fall in love. War, though inevitable, is being waged on foreign soil and is, therefore, of little importance.

The attraction that military service holds for the young noblemen of Russia is understandable enough, for the Russian army has always offered excellent opportunities for ambitious, politically inclined young men. The army provides a wholesome release for their energies. Young Nikolay Rostov, for example, joins the hussars simply because he feels drawn to that way of life. His family idolizes him because of his loyalty to the czar, because of his courage, and because he is so handsome in his uniform. Natasha, his sister, weeps over him, and Sonya, his cousin, promptly falls in love with him.

By contrast, Pierre Bezuhov, a friend of the Rostov family, is looked upon as somewhat of a boor. He has just returned from Paris, where he studied at the university, and he has not yet made up his mind what to do with his life. He will not join the army, for he sees no sense in a military career. His father gives him a liberal allowance, and he spends it frivolously at gambling. In truth, he seems like a lost man. He starts long arguments, shouting loudly in quiet drawing rooms, and then suddenly lapses into sullen silence. He is barely tolerated at soirees until his father dies and leaves him a fortune; then, suddenly, he becomes popular. He attributes his rise to some new personality development of his own, and he is no longer sullen; rather, he loves everyone, and it is quite clear that everyone loves him. His most dogged follower is Prince Vassily Kuragin, the father of a beautiful, unmarried daughter, Hélène, who is recognized everywhere as a prospective leader of St. Petersburg society. Pierre is forced into marrying her by the crafty prince, who knows a good catch when he sees one. The marriage, however, is not a success.

Pierre Bezuhov’s closest friend is Prince Andrey Bolkonsky, an arrogant, somewhat cynical man who despises his wife, Lise. The “Little Princess,” as Lise is called, is pregnant, but Prince Andrey can endure the bondage of domesticity no longer. When he receives a commission in the army, he leaves Lise at the family estate, Bleak Hills, in the care of his sister Marya and his tyrannical old father and goes off to war. During his absence, Princess Lise gives birth to a son but dies during childbirth. Prince Andrey returns after the Battle of Austerlitz to find himself free once more, but he enjoys no feeling of satisfaction in his freedom. He seeks out Pierre and turns to his friend for answers to some of the eternal questions of loneliness and despair that torture him.

Pierre has joined the brotherhood of freemasons and, through his association with the group, has arrived at a philosophy of life that he sincerely believes to be the only true philosophy. Had Pierre realized that the order initiated him solely because of his wealth, he would never have adopted the members’ ideals. Pierre restores some of Prince Andrey’s lost courage, however, by means of his wild if unreasoning enthusiasm. In the belief that he is now an unselfish, free individual, Pierre frees his peasants and sets about improving his estate; having absolutely no sense of business administration, he loses a great deal of money. Finally, with his affairs in hopeless disorder, he leaves an overseer in charge and retires to Bleak Hills and Prince Andrey’s sane company.

Nikolay Rostov is in the thick of...