Are you a teacher? Subscribe today to access hundreds of premium teaching resources and lesson plans! close
close
close
close
« Library « Fiction « The War of the Worlds « Summary 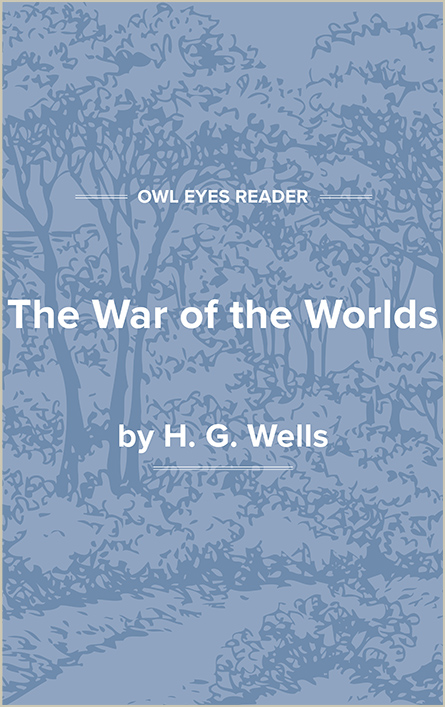 In The War of the Worlds, the Martians invade England, landing in ten cylinders at twenty-four-hour intervals, terrorizing the countryside and devastating the heart of London. It is perhaps the most plausible of Wells’s romances, for at the time it was thought that Mars might be inhabitable and that it was far older than the earth. It could well serve, then, as the site of beings who antedate humanity.

The Martians are much more highly developed than humans, but as the narrator discovers, they have landed on Earth to use it as a feeding ground. The Martians are wormlike creatures with bulging eyes and sixteen long, sensitive tentacles projecting from their mouths. They suck living blood. They arrive in huge, spiderlike engines, smothering cities with black smoke and defeating the opposition with heat rays not unlike lasers that can disintegrate artillery.

The Martians succeed where the invisible man failed in establishing a reign of terror, and much of the novel concerns their relentless, apparently invincible progress across the country. There is much less characterization in The War of the Worlds than in Wells’s other science fiction. Rather, the novel is intent on describing the mass hysteria such an invasion would stimulate and on showing how unprepared civilization is for the onslaught of forces from another world.

Wells is particularly hard on a vicar who takes refuge with the unnamed narrator, as if to suggest the usual comforts of religion, especially organized religion, are to little avail in a truly otherworldly event. The vicar is reduced to a state of abject terror, mouthing Christian pieties and proclaiming the day of judgment. In a half-starved, delirious state, he ventures toward the Martians before the narrator can stop him and is killed.

The concrete descriptions of London and of the damage wreaked upon it by the Martians enhance the verisimilitude of the narrative as the narrator struggles to survive and retain his presence of mind. Although he comes across another character who vows to carry on the fight, human expressions of defiance seem more pathetic than encouraging. It is astonishing how quickly civilization seems morally and physically bankrupted by the invasion.

There is little comfort in the denouement of the novel. The Martians succumb to the environment, having no antibodies to cope with bacteria that attack and destroy their nervous systems. Otherwise, they might very well have succeeded in destroying civilization. The narrator gradually comes to realize that the Martians are dying when he hears their awful, moaning shrieks.

Reviews of The War of the Worlds noted that the novel had the gripping quality of a firsthand newspaper dispatch, a dramatic presentation of bulletins as the...