Are you a teacher? Subscribe today to access hundreds of premium teaching resources and lesson plans! close
close
close
close
« Library « Fiction « What Men Live By and Other Tales « Leo Tolstoy Biography 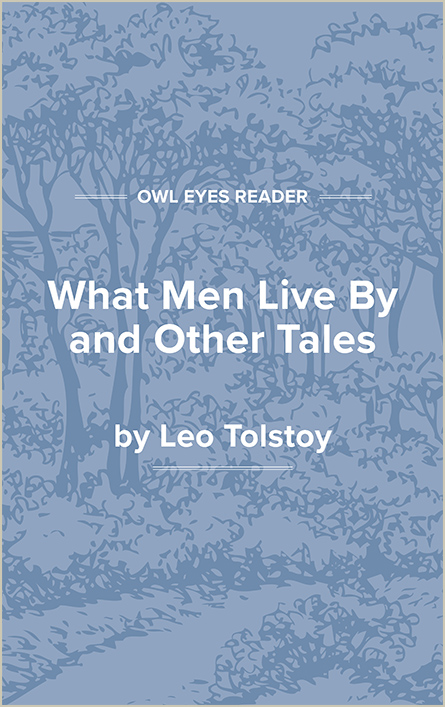 Article abstract: Tolstoy, an accomplished novelist for the first half of his life, achieved worldwide renown as a pacifist, social activist, and moral philosopher in his later years. He worked alongside the peasants and wrote numerous works critical of war, injustice, and the church.

Leo Tolstoy traced his aristocratic origins back to the founding of the Russian state in the ninth century. His ancestors, at times faithful servants, at times opponents of the Crown, amassed fame as well as respectable wealth over the centuries. Thus Tolstoy, though orphaned at age eight, grew up in comfort under the care of relatives at the various Tolstoy residences. He subsequently shaped a vague memory of his mother, who died when he was two, into an idealized portrait of the perfect woman and featured such a paragon in many of his major works. His first published narrative, Detstvo (1852; Childhood, 1862), re-creates a boy’s tender relationship with and painful loss of his mother.

A flamboyant lifestyle, filled with carousing and gambling, prevented Tolstoy from completing university study, but he revealed an early talent for writing and meticulously recorded daily details, from purest thoughts to debauched acts, in his diaries. He continued keeping such journals until old age, providing future literary historians with rich source material for every stage of his life. His elder siblings and relations, dismayed at the young count’s irresolution and wantonness, sent him in 1851 to the Caucasus, where Russia was engaged in sporadic military operations with hostile natives.

Tolstoy’s subsequent participation in the Crimean War put an end to the unstable years of his youth. Active service during the siege of Sevastopol motivated him to set down his impressions of the carnage in a series of sketches, “Sevastopol’ v dekabre,” “Sevastopol’ v maye,” and “Sevastopol’ v avguste” (1854-1856; collected in translation as Sebastopol, 1887). His original and above all truthful accounts pleased a public that had grown tired of the prevailing vainglorious, deceitful war reports. So convincingly did Tolstoy chronicle the horror of battlefield life and communicate his disillusionment with war that czarist censors moved to alter his exposés. Tolstoy’s later devotion to nonviolence stems from these experiences. His perceptions about the ineptitude of military commanders juxtaposed to the courage and common sense of foot soldiers resurface in his major work, Voyna i mir (1865-1869; War and Peace, 1886). Moreover, his dispute with the authorities over his forthright reporting set the stage for a lifelong confrontation with the imperial autocracy.

Tolstoy’s long literary career followed several distinct directions. The labors of his younger years belong to the field of aesthetic literature, though he embarked on that course only after lengthy deliberation. When he returned to St. Petersburg in 1855 following military service, high society lionized the young hero and for a time drew him back into the swirl of its carefree amusements. His strong didactic bent and quarrelsome nature did not, however, endear him to the literary establishment. He soon antagonized writers on all sides of the social and political spectrum and in the end thought it best to develop his talents without the help of contemporaries. The deaths of two brothers and an execution witnessed in Paris in 1857 led him to approach life in a more serious vein. He opened and directed a school for peasant children on his estate, using pedagogical methods that he himself established, and entered into lively journalistic polemics with other educators over his scheme of placing moral teachings above the acquisition of knowledge. These and other controversial public exchanges brought renewed government interference that impelled Tolstoy to turn to less antagonistic activity. In 1862, he married Sophia Behrs, sixteen years his junior, became a country gentleman, and...