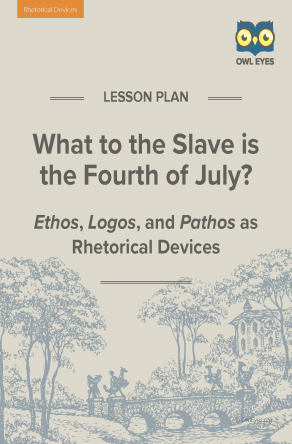 What to the Slave Is the Fourth of July? Rhetorical Devices Lesson Plan

Additional What to the Slave Is the Fourth of July? Resources

This lesson focuses on Douglass’s use of ethos, logos, and pathos as rhetorical devices in “What to the Slave is the Fourth of July?” Students will analyze passages from the speech and explain how Douglass employs appeals to ethos, logos, and pathos to persuade the audience that slavery should be abolished in the United States. In studying Douglass’s use of the rhetorical devices for persuasive effect, students will be able to identify and describe his central arguments in the speech and determine how effective they are in convincing the audience to adopt his position on the issue.

Frederick Douglass delivered his “What to the Slave Is the Fourth of July?” speech on July 5, 1852, in Rochester, New York, at the invitation of the Rochester Ladies’ Anti-Slavery Society. The occasion was the Society’s Fourth of July celebration, but Douglass refused to give the speech on July 4; he would not celebrate the holiday so long as African Americans remained enslaved. In the audience were President Millard Fillmore, numerous Washington politicians, and many of Douglass’s fellow abolitionists.

In the speech, Douglass makes his case for why slavery should be abolished immediately: slavery, he argues, is both anti-American and anti-Christian. Douglass also weaves into his argument observations that suggest that he, even as a free man, does not enjoy the same position in society as white Americans. In addressing the audience in Rochester, Douglass was speaking to the nation at large. A famous leader in the abolitionist movement and a noted orator, he knew his remarks would reach a much wider audience, and it was his intention to influence public opinion in favor of eradicating slavery in the United States.

Since Douglass was a celebrity in the abolitionist speaking circuit and friends with many in his audience, they likely expected to be praised for their commitment to freedom. However, the content of Douglass’s speech suggests a different approach in addressing them. After acknowledging the work and sacrifice of America’s founding fathers and honoring their commitment to liberty, the tone of Douglass’s speech changes. Celebrating America’s freedom on the Fourth of July, he points out, is hypocritical as millions of African Americans are enslaved, and the nation allows slavery and its horrors to continue. He identifies and condemns the forces at work in American society that support the institution of slavery, primarily greed and the subversion of the Constitution of the United States.

Douglass employs numerous rhetorical devices in presenting his argument that slavery must be abolished and in persuading his audience that his position on the issue must be adopted. Speaking as a former slave and a man well-educated in American history, the Constitution, and the Bible gives him authority in discussing the subject. Also, throughout his speech Douglass appeals to both reason and emotion as he develops logical arguments and evokes the conscience of his audience. His language is often poetic as well as powerful, making the speech even more compelling as he answers the question posed in the title.

Immediately after Douglass delivered his address, the Ladies’ Anti-Slavery Society endorsed his speech by a unanimous vote. “What to the Slave is the Fourth of July?” remains one of the most effective and poignant condemnations of slavery in the canon of American abolitionist literature, a tribute to the moral character and oratorical skills of Frederick Douglass.

Analyzing Rhetorical Devices in “What to the Slave is the Fourth of July?”: Activity Handout 1

Working as a group, analyze the passages from “Internal Slave Trade” in Douglass’s speech. Answer the questions over each passage, and record your answers on the handout. Refer to your copies of “A Guide to Rhetorical Terms” and “The Historical Context of Douglass’s Speech” as needed. Choose one member of your group to annotate the passages in the text and write annotations explaining your group’s analysis of the rhetorical devices. As each annotation is being written, monitor the content to make sure the annotation accurately and thoroughly expresses the findings of your group.