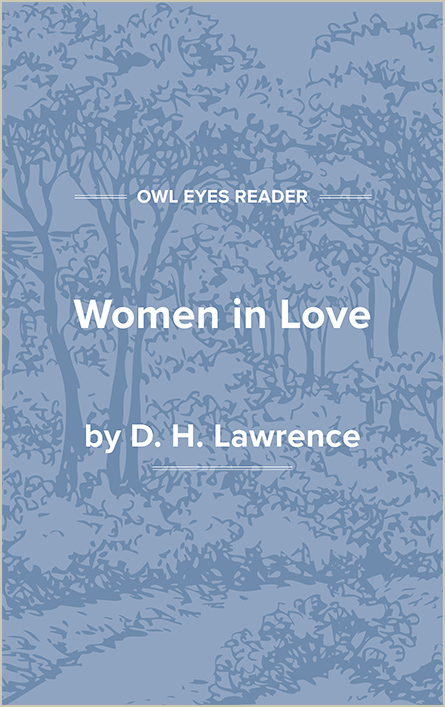 Ursula Brangwen and her sister Gudrun first notice Rupert Birkin and Gerald Crich as the sisters are watching a wedding party arrive at a church. Ursula explains that Rupert, the best man, is trying to terminate his prolonged affair with Hermione Roddice, one of the bridesmaids. Some days later, Rupert comes to inspect Ursula’s classroom with Hermione in tow. Hermione, after arguing fiercely with Rupert, invites Ursula and Gudrun to visit her home. Once alone, Ursula inexplicably weeps. Gudrun is drawn to Gerald, the bride’s older brother; when the sisters catch sight of him swimming, Ursula tells Gudrun that when he was a boy, Gerald accidentally killed his brother.

The Brangwen sisters become better acquainted with Rupert and Gerald when they visit Breadalby, Hermione’s home. Gerald finds Gudrun arousing when the women, in silk robes, improvise a modern ballet. After Rupert and Hermione again quarrel, Hermione tries to break his skull with a paperweight.

Some days afterward, Gerald appalls the sisters when he brutally forces his horse to stand as a train passes. Gerald and Hermione later find Gudrun sketching by the lake. Gudrun clumsily drops her sketchbook into the water. Gudrun, though blaming Gerald, establishes a silent intimacy with him. Meanwhile, Ursula finds Rupert repairing a punt, and, on an overgrown island, they discuss true happiness. Ursula finds Rupert’s misanthropic vision of a world rid of humans strangely pleasing. Afterward, having tea with Gerald and Hermione at Rupert’s new lodgings, Ursula objects when Rupert compares a horse’s will to submit to its master to a woman’s will to submit to a man. When she meets Rupert alone, however, he avows that while he does not “love” her, he seeks a relationship deeper than love, a “pure balance.” They watch as a cat playfully cuffs a female stray, and Rupert suggests that the cat wants the same equilibrium, like a star in orbit. Ursula still believes he wants a mere satellite.

When Gerald’s father gives the annual “water party” for the townspeople, the Brangwen sisters take a canoe to a clearing on the far shore. There, Gudrun dances as Ursula sings, and when some cattle appear, Gudrun brazenly dances before their horns until suddenly Gerald intrudes and, alarmed, shoos them off. Gudrun, repudiating his protection, strikes his face. As night falls, the couples row by lantern light, and Ursula reaches an understanding, a shared pessimism, with Rupert. They hear screams; Gerald’s sister fell into the water, and her fiancé dived in after her. In vain Gerald tries desperately to find the pair in the darkness. Rupert assures him that death is better for them. Toward dawn, they find the bodies, the girl’s arms clasped round her lover’s neck.

Rupert later drops in on Ursula at home. The profound sympathy between the young pair becomes evident as compared with her parents’ conventionality. After Rupert leaves, however, Ursula feels a strange hatred for him, even as she feels his possession of her. Still unable to reconcile himself to any marriage, Rupert begins to envision some new, freer relationship with women. When Gerald visits, the tenderness between them induces Rupert to invite him to swear blood-brotherhood, but Gerald demurs.

Gudrun is invited to tutor Gerald’s young sister in drawing, and when they agree to sketch the girl’s pet rabbit, it scratches Gudrun as she takes it from its cage. When it also scratches Gerald, he subdues it with a blow, and they share an appreciation of the fierce energy in the rabbit’s “madness.”