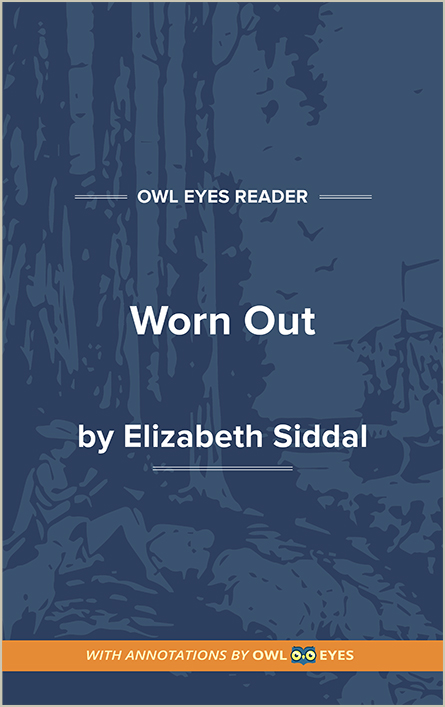 Character Analysis in Worn Out

The Speaker: Throughout the poem, the speaker pleads for her lover to leave her because she feels unfit to be in a relationship. It is not that the speaker no longer loves her partner, but that she feels like she cannot give what she thinks is needed. The speaker consistently reduces her sense of self to her anxieties and fears as if that is her only identity.

Character Analysis Examples in Worn Out:

The tension between the speaker’s command to “leave me” and “weeping” over her lover leaving suggests that this is not actually what the speaker wants; it is a form of martyrdom. She encourages her lover to leave not because she wants him out of her life; rather, she believes she is unable to love him the way he deserves. The poem then serves as a type of apology in which the speaker encourages her lover to walk away and inadvertently (or intentionally) reveals her selfless love for him in the process.

The violence of the preceding paragraph may make readers suspect that the speaker is trying to escape from a negative or unhealthy relationship. However, in this stanza, the speaker identifies herself as the negative element in the relationship. Her inability to “give to thee love” is revealed to be the reason the speaker “must fly” away from her lover.

“Aught” means “anything” in this context while “save” means “but.” In these two lines, the speaker claims that she cannot be anything but a bird with a broken wing. Again, the speaker reduces herself to her anxieties and pain rather than asserting an identity.

The speaker refers to herself as a “thing,” or an object that one need not, cannot, or does not wish to give a specific name to. In calling herself a “startled thing,” she dehumanizes herself. She is no longer a person but reduced to an object without a name. In adding the adjective “startled” to this identity, the speaker suggests that she is weak and fearful as well. In this stanza, she reduces herself to only her fear.