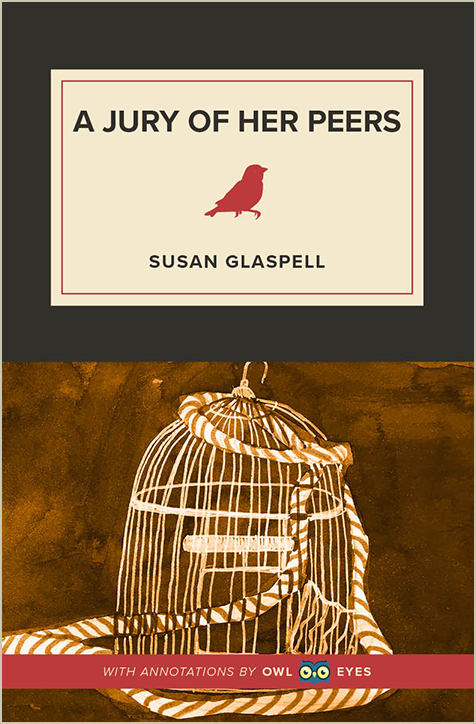 Foreshadowing in A Jury of Her Peers

Foreshadowing Examples in A Jury of Her Peers:

"Something to show anger—or sudden feeling."..."  See in text (Text of the Story)

Mr. Henderson’s search for a motive underscores the conventional sense of crime and punishment at play among the male investigators. As the story unfolds and the nature of the crime reveals itself, the piece of evidence “to show anger” turns out to complicate any standard notions of justice.

Notice that Minnie is inadvertently compared to a canary in this passage. The past-tense phrase “used to sing” ominously suggests that Minnie no longer sings for some unknown reason. Consider, too, that Mrs. Hale says that Minnie must have had a canary: otherwise, “why would she have a cage?” The use of the pronoun “she” is deliberate here, further associating Minnie with a caged bird. This comparison foreshadows coming events and leads us to reflect on the nature of the Wrights’ married life.

Rather than hearing what Mr. Hale has to say and drawing conclusions or observations from it, the county attorney cuts Mr. Hale off mid-sentence in order to control the story he is telling. This foreshadows how his arrogance and superior attitude will cause him to miss clues and discount evidence from people he does not value.

"lonesome-looking place..."  See in text (Text of the Story)

The Wright house is lonely, shaded by trees, and removed from the road. This description of the setting creates an ominous tone and suggests that there is something amiss about this home.