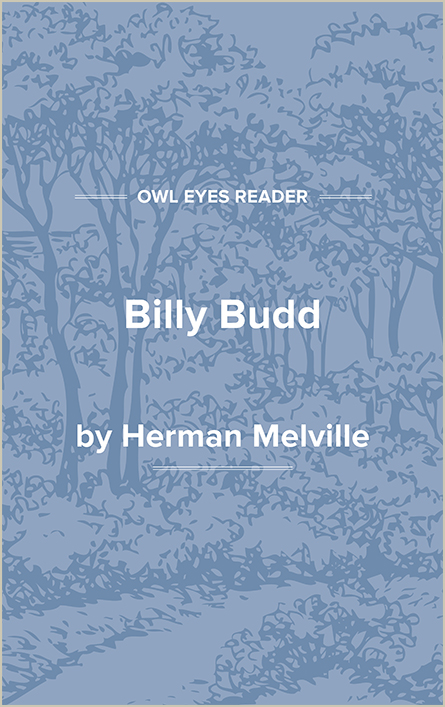 In 1797, the British merchant ship Rights-of-Man, named after the famous reply of Thomas Paine to Edmund Burke’s criticism of the French Revolution, is close to home after a long voyage. As it nears England, the merchant vessel is stopped by a man-of-war, HMS Indomitable, and an officer from the warship goes aboard the Rights-of-Man to impress sailors for military service. This practice is necessary at the time to provide men to work the large number of ships that Britain has at sea for protection against the French.

The captain of the Rights-of-Man is relieved to have only one sailor taken from his ship, but he is unhappy because the man is his best sailor, Billy Budd. Billy is what his captain calls a peacemaker; because of his strength and good looks, he is a natural leader among the other sailors, and he uses his influence to keep them contented and hard at work. Billy seems utterly without guile, a man who tries to promote the welfare of the merchant ship because he likes peace and is willing to work hard to please his superiors. When informed that he is not to return to England but is to head for duty with the fleet in the Mediterranean Sea, he does not appear disturbed; he likes the sea, and he has no family ties. He is an orphan who was left as a tiny baby in a basket on the doorstep of a family in Bristol.

As the boat from the warship takes him away from the merchant ship, Billy calls farewell to the Rights-of-Man by name, a deed that greatly embarrasses the naval officer who impressed him. The remark is unwittingly satirical of the treatment to which Billy is being subjected by the navy.

Once aboard the Indomitable, Billy quickly makes himself at home with the ship and the men with whom he serves in the foretop. As a result of his good personality and his willingness to work, he soon makes a place for himself with his messmates and also wins the regard of the officers under whom he serves.

At first, the master-at-arms, a petty officer named Claggart, seems particularly friendly to Billy, a fortunate circumstance, Billy thinks, for the master-at-arms is the equivalent of the chief of police aboard the warship. The young sailor is rather surprised, therefore, when he receives reprimands for slight breaches of conduct that are normally overlooked. The reprimands come from the ship’s corporals who are Claggart’s underlings. Since the reprimands indicate that something is wrong, Billy grows perturbed; he has a deadly fear of being the recipient of a flogging in public. He thinks he could never stand such treatment.

Anxious to discover what is wrong, Billy consults an old sailor, who tells him that Claggart is filled with animosity for the young man. The reason for the animosity is not known, and because the old man can give him no reason, Billy refuses to believe that the master-at-arms is his enemy. In fact, Claggart took a deep dislike to Billy on sight, however, and for no reason except a personal antipathy that the young man’s appearance had generated. Sly as he is, Claggart keeps, or tries to keep, his feelings to himself. He operates through underlings against Billy.

Not long after he was warned by the old sailor, Billy spills a bowl of soup in the path of Claggart as he is inspecting the mess. Even then, Claggart smiles and pretends to treat the incident as a joke, for Billy did the deed accidentally. A few nights later, however, someone awakens Billy and tells him to go to a secluded spot in the ship. Billy goes and meets a sailor who tries to tempt him into joining a mutiny. The incident bothers Billy, who cannot understand why anyone would approach him as a possible conspirator. Such activity is not a part of his personality, and he is disgusted to find it in other men.

A few days later, the master-at-arms approaches the captain of the ship and reports that he and his men discovered that a mutiny is being fomented by Billy. Captain Vere, a very fair officer, reminds Claggart of the seriousness of the charge and warns...