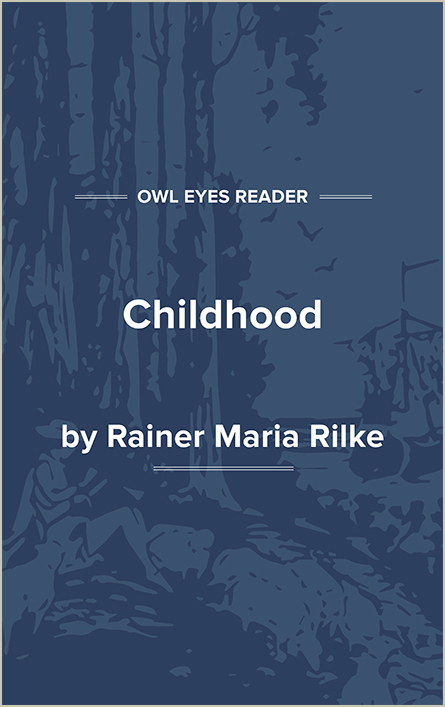 Rainer Maria Rilke (RIHL-kuh) is the most important and influential German poet of the twentieth century; along with the Anglo-Irish William Butler Yeats and the French Paul Valéry, he caused a transformation of lyric poetry, opening up new directions and potentialities. He was born (baptized René Karl Wilhelm Johann Josef Maria Rilke) on December 4, 1875, in Prague, then within the dominion of the Austro-Hungarian Empire, the second largest administrative unit in Europe. The Rilke family had long been established as fairly prosperous land agents near Prague and claimed descent from a long line of Carinthian nobility. Rilke’s father had begun his adult life as a career military officer, but he was forced to resign his commission because of a chronic throat problem. Thereafter he worked as an Austrian railroad official, eventually transferring his dreams of military glory to his son, who, he hoped, would triumph where he had failed. Rilke’s mother, a poet with aristocratic fantasies, had other ideas.

At the age of eleven, when Rilke had completed his early schooling, his parents’ marriage dissolved. Rilke was sent to boarding school; his father’s will prevailing, he entered a rigorous military academy. He later reported that the Prussian discipline traumatized him; although some critics have doubted the severity of the training, Rilke certainly reacted against the bourgeois values of a society that supported such institutions and ideals. Chronic illnesses, probably psychosomatic, eventually forced his withdrawal. He was expected to take over his uncle’s law practice in Prague, but he became increasingly disenchanted with law and attracted to poetry. With the publication of his first volume, Leben und Lieder (life and songs), in 1894, his vocation was set.

For the next several years he published regularly, though he would ultimately renounce as juvenile all this material, including his most popular work, The Tale of the Love and Death of Cornet Christopher Rilke, a rhythmical balladesque recounting of the experiences of a seventeenth century soldier, Rilke’s ancestor. Yet his real breakthrough as a poet had already begun. It started with his discovery of Friedrich Nietzsche, who instilled a philosophy of struggle, and of the Danish novelist Jens Peter Jacobsen, who taught him to look at nature as a source of images corresponding to emotional states. He followed this with two trips to Russia, where he was overwhelmed with both the immense landscapes and the combination of piety and fatalistic resignation in the Russian soul. Contact with an artists’ colony at Worpswede near Bremen fused these influences by helping him look for plastic equivalents for feelings, something akin to T. S. Eliot’s theory of the objective correlative. Finally he went to Paris in 1902; he found the modern metropolis terrifying and spirit-robbing. The sculptor Auguste Rodin took him in, insulated him against the shock of the city, taught him more about the way sculpture could shape poetic images, and hired him as a private secretary.

The employment lasted only eight months, but it moved Rilke to take an entirely fresh approach to lyric poetry. This revelation was disclosed only gradually. The first traces appear in The Book of Images, to the second edition of which (in 1906) he added thirty-seven poems, including some of those for which he is best known. Even before this he published The Book of Hours, in which he first adopts the persona of a Russian monk meditating on the interrelationship of humankind, nature, and God, then speaks as the poverty-stricken street people of Paris. These poems introduce a unique pantheistic mysticism, a celebration of natural religion that absorbs familiar Christian images.

The transformation reached full flower in his New Poems , especially in the second volume, published in 1908. These were different enough from anything he had done earlier that he distinguished them as “experiences”; the others were simply...