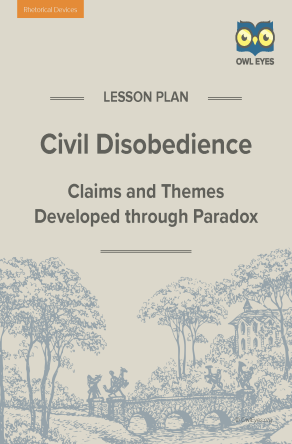 Claims and Themes Developed through Paradox

Learning Objectives: By the end of the lesson, students will be able to

In July of 1846, while walking in his hometown of Concord, Massachusetts, Henry David Thoreau was arrested by Sam Staples, the town constable and tax collector.

For six years, Thoreau had refused to pay his poll tax, and when he declined once again, Staples put him in jail. News of Thoreau’s arrest spread quickly through the small community; the following morning he was released, the tax having been paid by an anonymous friend. Far from feeling ashamed of being arrested and jailed, Thoreau publicized the event in a speech he delivered in 1848, which he published in 1849 as an essay, “Resistance to Civil Government.” In later publications, the essay was titled “Civil Disobedience.”

Thoreau’s refusing to pay the tax, as he explains in the essay, was a personal moral stand against the Mexican-American War, which he viewed as an unjustified land grab by the United States that would ensure the spread of slavery westward. Paying the tax, he asserted, would make him morally complicit in the American government’s unjust actions. Like other members of the New England transcendentalism movement, Thoreau valued individualism; he believed that an individual, guided by conscience, must resist the demands of corrupt governments and institutions, even at the cost of losing personal freedom and property.

Thoreau understood that his philosophy did not align with that of traditional New England society, which valued deferring to the dictates of the law and of political and religious institutions. In “Civil Disobedience,” he argues for thinking independently and following one’s conscience in matters of moral principle, contending that to do otherwise results in the loss of spiritual integrity. Thoreau’s arguments are often developed through paradoxical statements that illustrate the contrary and novel aspects of his thinking. Employing paradox is an effective rhetorical strategy in the essay, for, by definition, a paradox contradicts prevailing assumptions or “common sense” to make room for a fresh idea or perspective. Through the use of paradox, Thoreau unsettles readers and draws them into considering his unconventional views.

After almost two centuries, “Civil Disobedience” continues to resonate with readers in its examination of the individual’s relationship to society and the state. During the 20th century, Mahatma Gandhi and Martin Luther King, Jr. each drew inspiration from Thoreau’s essay in leading revolutionary political movements through non-violent resistance to injustice in their respective countries. Harnessing the power of Thoreau’s philosophy, Gandhi led India to freedom from British rule, and King led the American Civil Rights movement to success in the 1960s. The enduring relevance of Thoreau’s 1849 essay can be attributed primarily to its themes, which are universal and timeless.

Passage 1: “The broadest and most prevalent error requires the most disinterested virtue to sustain it. The slight reproach to which the virtue of patriotism is commonly liable, the noble are most likely to incur. Those who, while they disapprove of the character and measures of a government, yield to it their allegiance and support, are undoubtedly its most conscientious supporters, and so frequently the most serious obstacles to reform.”