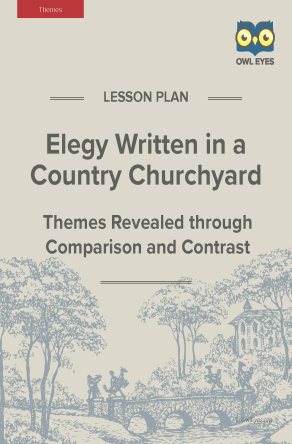 This lesson plan focuses on Gray’s use of contrast in developing several major themes in the poem. Students will identify and examine how Gray describes the villagers before and after their deaths and how their simple lives contrast with those of the wealthy and powerful. Students will analyze the speaker’s perspective on death and memory by studying specific passages, namely descriptions of the headstones, perceptions of the villagers’ lives, and references to famous people from English history. By analyzing contrasting elements in the text, students will be better able to identify themes in the poem and explain how the text develops to further these themes.

One of the best-loved and most-often quoted poems in English literature, “Elegy Written in a Country Churchyard” established Thomas Gray as a major poet among his literary peers.

Thomas Gray’s life was fraught with conflicts and personal tragedies; they, as well as a perhaps obsessive perfectionism regarding his writing, resulted in his producing a limited body of poetry. The poems he did publish, however, are regarded as premier works in 18th-century English literature, with none more celebrated than “Elegy in a Country Churchyard.”

Published in 1751 as “An Elegy Wrote in a Country Church Yard,” Gray’s signature work is a sophisticated meditation on the nature of death. While the poem’s narrator explores his personal thoughts about death and memory, the elegy’s themes are universal. Written in the structure and style of 18th-century neoclassic poetry, the elegy features elements that anticipate the rise of romanticism in English literature. It focuses on the individual life, the elevation of the common man, and the depiction of the natural world as a source of beauty and peace.

Gray’s elegy opens with his famous description of the English countryside at twilight, meditating on lowing herds, tolling bells, and slow, plodding motions of workers returning home.: “The curfew tolls the knell of parting day. / The lowing herd winds slowly o’er the lea. / The plowman homeward plods his weary way. / And leaves the world to darkness and to me.” As shadows fall and the moon rises, Gray directs readers’ attention to the graves in the cemetery near the village church. The poem’s dynamic meditation on death begins with a description of the lives of those buried in the churchyard and ends with the speaker describing his own death as he imagines it. The somber, meditative tone of the poem adds to the dreamy, pensive tone of the poem. The speaker moves from specific thoughts about his own mortality to general ideas about the nature of death and back again to contemplate death as both a personal and universal experience.