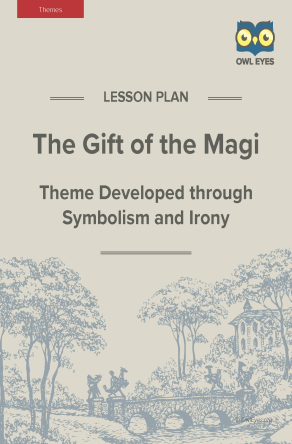 The Gift of the Magi Themes Lesson Plan

This lesson focuses on symbolism and situational irony in O. Henry's short story “The Gift of the Magi,” particularly in regard to the plot and the characterizations of Jim and Della Young. Students will identify examples of the two literary elements in the text and interpret the ideas they communicate. By analyzing symbolism and situational irony in the narrative, students will be better able to describe the story’s major theme.

Known by his pen name “O. Henry,” William Sydney Porter wrote hundreds of short stories that were published in magazines and newspapers of his day and printed in collections of his work. “The Gift of the Magi” is undoubtedly Porter’s most famous story. First published as “Gifts of the Magi” in the New York Sunday World two weeks before Christmas in 1905, the story re-appeared in 1906 as “The Gift of the Magi,” collected in The Four Million, a volume of O. Henry’s short stories set in New York City.

The plot of the story is well-known, especially its ironic conclusion. Jim and Della, a young married couple who love each other very much, live in poverty in New York City. As Christmas nears, Della secretly sells her most valued possession—her long beautiful hair—to buy Jim a fine chain for the pocket watch he treasures. When Della gives her present to Jim, she finds out that he has secretly sold his watch to buy her the expensive combs she has often admired. Their costly Christmas gifts are useless, for the time being at least, but in their sacrifices, Jim and Della give each other the greatest of gifts: unselfish love. Like that of the Magi, the three wise men who brought gifts to the Christ child, Jim and Della’s devotion expresses the true meaning of Christmas.

Since its initial publication, “The Gift of the Magi” has seldom waned in popularity. It is included in many anthologies of American literature and has been adapted for the stage and screen, in the United States and abroad. The story also has made its way into American popular culture, with versions of the tale appearing in episodes of television programs and in musical productions. Although numerous literary critics have dismissed the artistic value of O. Henry’s stories, many place “The Gift of the Magi” among the best Christmas stories ever written.

Worksheet Excerpt: Analyzing Symbolism and Situational Irony in “The Gift of the Magi”

Working as a group, discuss the following questions and record your answers on the handout. Refer to the text on Owl Eyes as you discuss and answer the questions. Choose one member of your group to highlight passages in the text that suggest symbolism and situational irony and write an annotation for each passage explaining how your group interprets ideas in the passage. As each annotation is being written, monitor the content to make sure the annotation accurately and thoroughly expresses the analysis of your group.