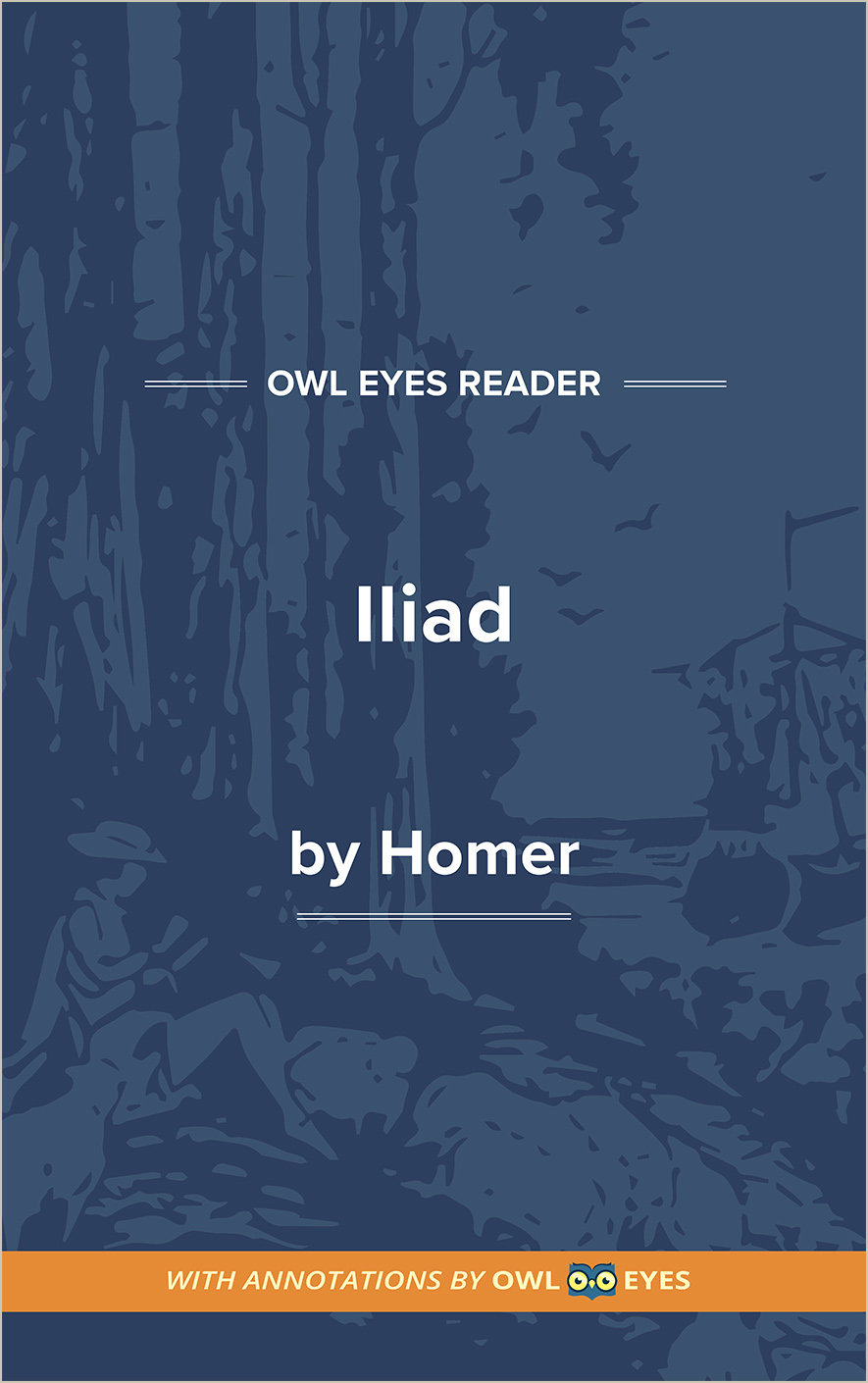 Allusion: Due to the long tradition of oral literature that became central to the preservation of ancient Greek culture, the Iliad is riddled with allusions to both past and future events surrounding the particular time the story is set. Because of the popularity of mythological retellings, ancient Greek audiences would have already been familiar with many of the myths and lore that form the foundation of the Iliad. Homer is aware of this, and does not take much time explaining the events that had already occurred or would occur shortly after the events of the story. He instead alludes to them and allows the reader to fill in the blanks.

Foreshadowing: Ancient Greek literature and foreshadowing go hand-in-hand largely due to the inclusion of prophecy and fate in most, if not all, storylines surrounding the Greek storytelling tradition. We are provided with the knowledge that Troy will eventually fall, even if we do not read it within the Iliad, because Homer offers the information freely in the form of prophecy. We also learn the fates of many characters in the same way before they meet their ends.

Irony: The Iliad includes many examples of the various kinds of irony, the most notable the dramatic irony that exists between the reader’s knowledge of the gods’ mediation of the war and the resulting actions of mortals. The war is frequently paused or interrupted while the gods debate how an event will play out and how the characters’ fates change as a result. This puts the reader in the know before characters ever actually play out the will of the gods.

In Medias Res: The plot of the Iliad begins in medias res, or in the middle of the action. There is little build up to conflict; instead, Homer drops readers into the war many years after its beginning. He chooses to start with the capture of Chryseis and Briseis because this is the event that will spur Achilles to leave the battlefield and sets the stage for bigger conflicts later. It was assumed that readers would know the events that sparked the Trojan War, so there is not a great need for immediate exposition.

This epithet is a nickname for the god Apollo, who was often depicted carrying a bow and arrow.

One characteristic of epic poetry is the narrator's invoking a muse to help tell the story. The Muses were nine daughters of Jove, each of whom governed a particular science or art form. The narrator is probably referring to Calliope, the Muse of epic poetry. The other eight Muses and their domains include Clio (history), Erato (love poetry), Euterpe (music), Melpomene (tragedy), Polyhytmnia (sacred poetry), Terpsichore (dance), Thalia (comedy), and Urania (astronomy).

The Iliad contains numerous graphic descriptions of extremely grotesque deaths. Such descriptions realistically illuminate the horror and brutality of war which contrast with the poem’s glorification of battle. This contrast reveals the duality of war, both as an instrument of death and means of winning glory and fame.

The description of death as a dark veil is a common motif in The Iliad. Notice the recurrence of this metaphor and how Homer often uses metaphor or epithet to refer to characters or ideas in the poem.

Notice here another characteristic of the epic poem: aristeia, a dramatic convention which serves to describe the greatest heroic exploit of a particular warrior. The word itself means excellence or a warrior's prowess. While Book V describes the exploits of Diomed, there are several more examples of aristeia in the epic, including that of Achilles in Books XX through XXII.

A “far-darter” is another epithet for the god Apollo, who was an expert archer.

The plea for ransom comes up approximately a dozen times in the Iliad. This points to the fact that Troy was an extremely wealthy city and, therefore, would be able to pay a ransom to get back its prisoners of war. The poet-narrator seems to state that because of their great wealth, the Trojans believe that money can buy almost anything and that the civilized exchange of prisoners is an option in war. Unfortunately for the Trojans, the Achaeans do not subscribe to this idea.

"the beginning of the ill that presently befell him...."  See in text (Book XI)

This passage is another example of foreshadowing, which occurs many times in the Iliad. The technique was used to conform to the concept of epic poetry rather than to further the suspense. Most listeners had already heard the poem or knew of the legends before hearing the poetry, so suspense about what would happen in the plot was not a crucial element, but was characteristic in shaping the genre.

"As a lion fastens on the fawns of a hind and crushes them in his great jaws, robbing them of their tender life while he is on his way back to his lair—the hind can do nothing for them even though she be close by, for she is in an agony of fear, and flies through the thick forest, sweating, and at her utmost speed before the mighty monster..."  See in text (Book XI)

The Iliad is filled with epic similes, especially ones like this, which involve predators and their prey. The main difference between an epic and ordinary simile is that an epic is longer and more involved.

"the vein that runs all the way up the back to the neck..."  See in text (Book XIII)

The vein referenced in this passage is an example of literary conceit; no vein in the human body matches this description. The vivid and gory descriptions of battle contrast with moments of kind and loving behavior, which humanizes many of the fiercest warriors in the Iliad. Hector loves and cares deeply for his family while Achilles shares a bond of brotherly love with Patroclus. This shows that both men have relationships they care for outside the glory and gore of battle. As readers, Homer allows us to sympathize with the characters by giving them depth, and we grieve when they die and suffer as the original audience would have.

Notice this plea from Nestor is an almost exact repetition of Ajax’s plea in Book VIII, supporting the idea that repetition is a powerful motif in the Iliad. This particular passage also reflects the idea that speech can be an extremely strong rallying tool. During the story, whenever morale is low, a skillful orator is almost always able to bolster the troops with a powerful speech.

"Achilles will then send his comrade Patroclus into battle, and Hector will kill him in front of Ilius after he has slain many warriors, and among them my own noble son Sarpedon. Achilles will kill Hector to avenge Patroclus, and from that time I will bring it about that the Achaeans shall persistently drive the Trojans back till they fulfil the counsels of Minerva and take Ilius..."  See in text (Book XV)

Here Jove lays out the plan for all the events to come. The Iliad is unique in that there is no real element of suspense or surprise for the audience or the characters. Each character’s fate is predetermined from the start, leaving the real element of drama in the way each acts or reacts despite already knowing what the ultimate outcome will be. All characters still attempts to make decisions and choices even though there isn’t much room for free will under the prophecies that hang over their individual lives.

"First he shaped the shield..."  See in text (Book XVIII)

This phrase begins a long and highly detailed description of the shield that is forged for Achilles. This is an example of ekphrasis, a literary device in which one art form describes another. In this case, Homer’s epic poem describes the visual art depicted on the shield and the process of crafting of the shield itself.

"As a fire raging in some mountain glen after long drought—and the dense forest is in a blaze, while the wind carries great tongues of fire in every direction—even so furiously did Achilles rage..."  See in text (Book XX)

Achilles is frequently compared to a fire because of his rage and impulsivity. Like an out-of-control flame, Achilles is capable of changing directions on a whim and leaving a wide path of destruction in his wake. Because he is unable to kill Hector due to divine interference, he takes out his anger on other Trojans, furious for being at the gods’ whims.

The detailing of one's lineage is a common motif in The Iliad. This passage outlining Aeneas’s heritage is particularly important because Aeneas will eventually be the last survivor of the royal house of Troy, and the only one who can continue on his family’s heritage.

"as close behind him as the shuttle is to a woman's bosom when she throws the woof across the warp and holds it close up to her..."  See in text (Book XXIII)

The terms in this simile all refer to the act of weaving fabric. A “shuttle” carries thread for weaving; “woof” and “warp” both refer to the thread’s position in a fabric. Like the way a weaver carries her cloth close to her chest, Ulysses follows Ajax.

Notice that the situation here is very similar to the the one at the beginning of the Iliad when Agamemnon tactlessly takes Briseis, Achilles's war prize, away from him. Though that event led to great conflict and strife, this argument is resolved quickly, showing that Achilles values peaceful resolution more than he did at the beginning of the poem.

"The old man went straight into the house where Achilles, loved of the gods, was sitting...."  See in text (Book XXIV)

The poem ends very much like it began: a father crossing enemy lines to get back his child. In Book I, it was Chryses who begged Agamemnon to return his daughter. Now, it is Priam who begs Achilles to return the body of Hector. This is an example of ring structure, a literary technique in which a scene or theme at the beginning of the story returns at the end of the story. In other words, the story is structured like a circle.