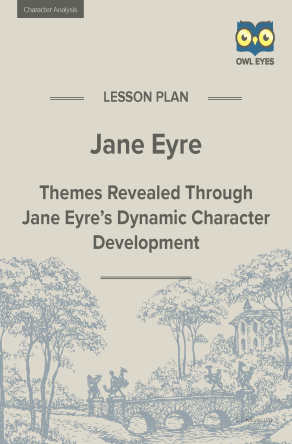 This lesson plan focuses on Jane Eyre as a dynamic character whose moral and spiritual development reveal and reinforce major themes in the novel. Students will examine Jane Eyre as a dynamic character by comparing and contrasting her feelings, motivations, and actions at various key points throughout the novel. In studying how Jane Eyre’s character changes over the course of the novel, students will be better able to describe and understand key themes in the text.

Skills: close reading, comparing and contrasting, drawing inferences from passages in the text, character analysis, drawing themes from the text

Though immensely popular among the general public, Charlotte Brontë’s (1816–1855) now-iconic Jane Eyre garnered both high praise and harsh criticism from literary critics when it was first published in 1847. Responding to the scandalous romance between the characters of Jane and Mr. Rochester, Elizabeth Rigby of the Quarterly Review deemed the novel “anti-Christian.” Its popularity, she insisted, “is a proof how deeply the love for illegitimate romance is implanted in our nature.” Conversely, author and critic George Lewes praised the novel’s realism, saying that “reality—deep, significant reality—is the great characteristic of the book.” Lewes also correctly observed that Jane Eyre’s author “is evidently a woman,” which Brontë found disappointing and unnecessary. She initially published the novel under the masculine pen name Currer Bell because Victorian society valued female writers less than their male peers.

Jane Eyre is simultaneously a bildungsroman—or coming-of-age story—and a Gothic novel. It follows the moral and spiritual development of Jane Eyre, an orphan seeking both independence and acceptance in Victorian society. The rebellious scandalousness criticized by reviewers like Elizabeth Rigby is due in part to the novel’s questioning of Victorian values, particularly the institution of marriage and limited place of women in a male-dominated society. Furthermore, the lyrical intensity—sometimes bordering on the fantastic or supernatural—with which the novel expresses Jane’s thoughts and feelings was previously only seen in poetry. In many ways, Jane Eyre revolutionized both fiction and the novel form.

Like many bildungsroman novels, Jane Eyre’s key themes are best understood in the context of the personal and moral development of its protagonist. At the start of the novel, Jane is a dependent, undisciplined, and emotional child. She relies entirely on her aunt, a woman who, along with Mr. Brocklehurst, attempts to instill in Jane the Victorian values of humility and obedience, and convince her of her inferior place in society as a woman.

However, over the course of the novel, the headstrong Jane acquires independence through education, creativity, and hard work. With her autonomy and self-sufficiency, Jane embodies the novel’s rejection of the Victorian notion that women do not require the intellectual and creative stimulation that men do. Furthermore, the novel questions the traditional class boundaries that separate Jane from the upper-class Mr. Rochester. Indeed, Jane eventually elevates herself to become his equal by the end of the novel. Whether read as a broad-scale rejection of Victorian values or as a progressive proto-feminist work, Jane Eyre continues to appeal to readers well over a century after its publication and will doubtlessly endure as a staple in English classrooms for a long time to come.

Work in your group to analyze the following excerpts from the text in the left column. Discuss what each passage reveals about Jane’s character and record your answers in the right-hand column.

“That eye of hers, that voice, stirred every antipathy I had. Shaking from head to foot, thrilled with ungovernable excitement, I continued: “I am glad you are no relation of mine: I will never call you aunt again as long as I live. I will never come to see you when I am grown up; and if any one asks me how I liked you, and how you treated me, I will say the very thought of you makes me sick, and that you treated me with miserable cruelty.”

“Now I never had, as the reader knows, either given any formal promise, or entered into any engagement; and this language was all much too hard, and much too despotic for the occasion. I replied, “There is no dishonor; no breach of promise; no desertion in the case. I am not under the slightest obligation to go to India: especially with strangers. With you I would have ventured much; because I admire, confide in, and, as a sister, I love you: but I am convinced that, go when and with whom I would, I should not live long in that climate.”

Sum it up: Based on these two passages, in what ways has Jane changed as a character from chapter IV to chapter XXXV? In what ways has she remained the same person?