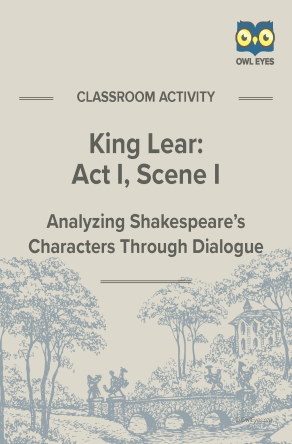 The Tragedy of King Lear, one of Shakespeare’s most critically acclaimed dramas, depicts the tangled family relationships in Lear’s royal court and the consequent suffering and destruction wrought by pride, ambition, greed, and betrayal. Determined to free himself from the demands of the monarchy while retaining his power and authority, Lear foolishly divides his kingdom between his duplicitous elder daughters, Goneril and Regan, while banishing his youngest, Cordelia, when she refuses to flatter him in exchange for his grace and favor. Lear’s pride blinds him to the truth—that of his three daughters, only Cordelia loves him. The themes developed through Lear’s relationships with his daughters are underscored in the play’s subplot as Gloucester, Lear’s friend, is betrayed by Edmund, the illegitimate son he loves and trusts. Witnessing Lear’s tragedy as it unfolds, and unable to save his foolish king, is the loyal Kent, whom Lear also banishes in a fit of rage. All the major characters, apart from Edgar, Gloucester’s legitimate son, are introduced in act I, scene I, and their essential character traits are quickly established in the dialogue.