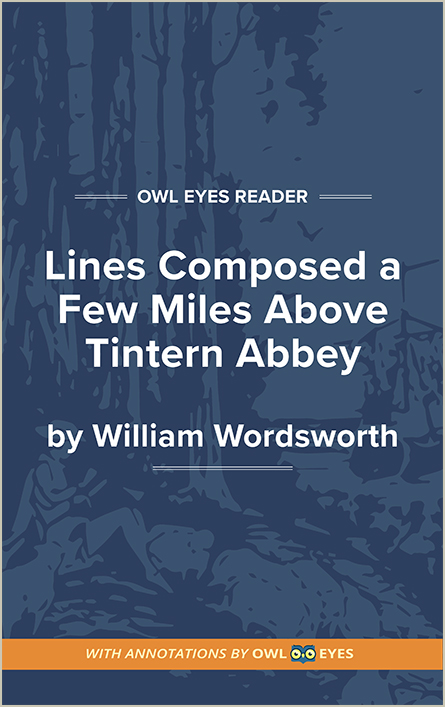 William Wordsworth (1770-1850) was born in Cockermouth, England and attended Hawkshead Grammar School, where his love for poetry developed. Later, he studied at St. John’s College, Cambridge. During his university years, Wordsworth witnessed the effects of the French Revolution firsthand while on a walking tour of Europe. He sympathized with the cause of the revolution because in his opinion, revolution was one of the most romantic, spontaneous acts of rebellion. However, after witnessing the brutality and gruesomeness of the war, Wordsworth began to lose faith in humanity, believing that only nature could provide him comfort and solace. In 1795, Wordsworth met fellow poet Samuel Taylor Coleridge, and together they published Lyrical Ballads in 1798. Among the foremost Romantic poets, these men turned away from the prominent epic poems of the time in favor of lyric poetry that contemplated man’s place in nature, the role of the imagination, and the possibilities for sublime experience.

Lines Written a Few Miles above Tintern Abbey, on Revisiting the Banks of the Wye during a Tour, July 13, 1798

"The wild green landscape...."  See in text (Lines Written a Few Miles above Tintern Abbey, on Revisiting the Banks of the Wye during a Tour, July 13, 1798)

Used repeatedly throughout the first stanza, the descriptors “green” and “wild” illustrate a fertile, abundant landscape beginning to become contaminated by signs of industrialization. Romantics envisioned a simple past and disapproved of the corruption of nature by factories and pollution.

"connect The landscape with the quiet of the sky...."  See in text (Lines Written a Few Miles above Tintern Abbey, on Revisiting the Banks of the Wye during a Tour, July 13, 1798)

One of the major visions of the Romantic movement was to paint and write about landscape with newfound reverence. Here, Wordsworth praises nature through his description of his surroundings, specifically in the blurred distinctions between the objects in nature—how the landscape “connect[s]” with the sky through the imprint of the cliffs; how the color green extends to every door. The melding of land and sky, as well as the broader conception of Nature as a unified whole, is a motif that characterizes much of the art of the Romantic movement.

"Five years have passed;..."  See in text (Lines Written a Few Miles above Tintern Abbey, on Revisiting the Banks of the Wye during a Tour, July 13, 1798)

Wordsworth opens his first stanza by establishing the context of the poem. This poem, as clearly described in the title, was written five years after a walking tour from London to North Wales in 1793. Now, five years later on July 13, 1798, Wordsworth returns to the same spot, which overlooks the village of Tintern on the west bank of the River Wye in Wales. The title provides a sense of perspective—both physical and temporal—and indicates that Wordsworth stands on a secluded cliff “above” the village below. This intimates a sense of distance from the village, as though Wordsworth were standing back and observing both the village and his life from afar.