Are you a teacher? Subscribe today to access hundreds of premium teaching resources and lesson plans! close
close
close
close
« Library « Nonfiction « Narrative of the Life of Frederick Douglass, an American Slave « Summary 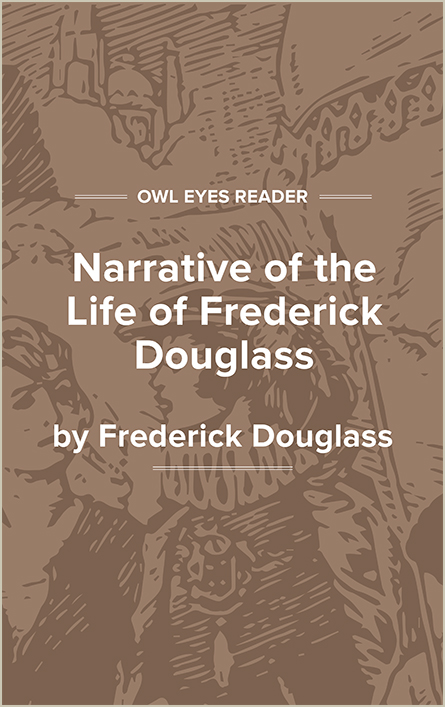 There are about six thousand records in existence of slaves who either wrote their own stories or told them to others. Of these works, commonly known as slave narratives, Frederick Douglass’s Narrative of the Life of Frederick Douglass, an American Slave is nearly universally considered to be the most compelling and well written. Douglass went on to write two more autobiographies, My Bondage and My Freedom (1855) and Life and Times of Frederick Douglass, Written by Himself (1881), to found several abolitionist magazines—most notably North Star—and to become the greatest African American orator and statesman of his age. However, he is primarily known for his first book, which he wrote before the age of thirty and despite the fact that he had never gone to school. Douglass’s autobiography came to be one of the most frequently taught books at American colleges and universities, where together with Moby Dick (1851), The Scarlet Letter (1850), and Uncle Tom’s Cabin (1851-1852) it was regarded as a seminal source for understanding the United States in the antebellum period of the nineteenth century.

Douglass’s story began humbly. Douglass describes how, as a young boy growing up as a slave in Talbot County, Maryland, he never knew his age or the identity of his father. Slave owners did not consider it necessary to tell slaves such facts or to try to keep families together. His mother, Harriet Bailey, was separated from him when he was an infant. Douglass saw her only four or five times during his life, and then only at night when she paid surreptitious visits from the plantation twelve miles away where she was sold; she always had to leave before her young son woke up, and she died when Douglass was seven.

It is possible that the man who owned Douglass, Captain Anthony, was his father. Owners often took sexual advantage of their slave women, and as a boy, Douglass saw his master beat his Aunt Hester out of jealousy because a slave from a neighboring plantation paid attention to her. The pain slaves experienced from mistreatment and beatings often led them to sing songs with “words which to many would seem unmeaning jargon” but which conveyed the depths of their hardship. Such songs were their only outlet for expression.

Throughout his childhood on the plantation, Douglass (who did not then have a last name and was simply known as Frederick) witnessed many acts of cruelty, ranging from unjust beatings to unwarranted and unpunished murder of slaves by white owners or their overseers. As a child, he owned only one shirt, had to sleep on the ground, and ate his meals of corn mush from a common trough. It was his good fortune to be sent to Baltimore to the home of Hugh Auld, a relation of Captain Anthony. There, he not only enjoyed better living conditions but also was closer to the North. Had he not been sent to Baltimore, Douglass might never have escaped slavery.

In Baltimore, Mrs. Auld began to teach Douglass his abc’s. When Mr. Auld discovered this, he was furious, telling her that teaching a slave how to read was the quickest way to “spoil” him. Deciding that anything his master deemed bad must be good for him, Douglass became determined to teach himself to read. He devised a way to trick other little boys into inadvertently giving him lessons by pretending to know more than they did and making them prove otherwise.

By the age of twelve, Douglass could read essays from a book of famous speeches he acquired. Reading, however, showed him for the first time the true injustice of his own position. For the first time, he realized that there were people opposed to slavery and that there were compelling arguments against the practice. He resolved to run away as soon as he was old enough and the right opportunity presented itself.

Along with understanding the potential power inherent in the ability to read—nothing less than “the power of the white man to enslave the black man”—Douglass also began to understand his own condition...