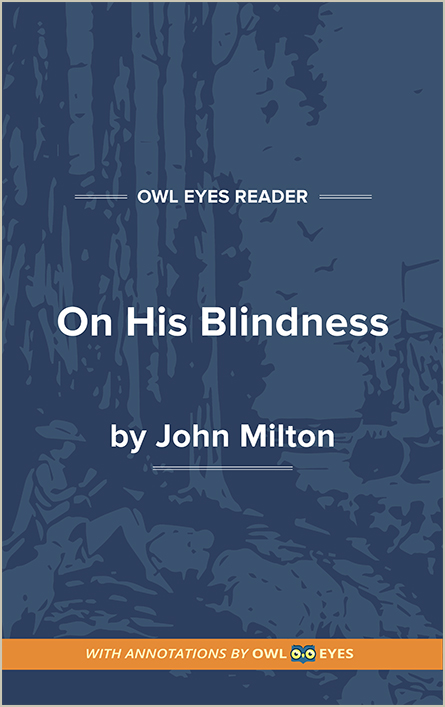 Metaphor in On His Blindness

Metaphor Examples in On His Blindness:

The speaker’s reference to his “one talent” suggests a third metaphorical meaning of light. Light is a classic motif for knowledge—intellectual illumination. For the writer, light represents inspiration. When the speaker claims that his “light is spent,” one can say that he is lamenting a case of “writer’s block.”

“Mild yoke” is an allusion to the Bible: “My yoke is easy, my burden is light” (Matthew 11:30). In the law of the Old Testament, Jewish people were required to follow over 600 strict religious laws. Jesus used this metaphor to relieve them of the burden of these laws. He claimed that there were only two laws man needed to follow: love God, love each other. Thus the “yoke” and “burden” of Jesus was both forgiving and “light.” To “bear his mild yoke” means to follow Jesus’s two commandments to love God and love each other.

“Light denied” in this context means blindness. Notice that there is an undercurrent of blame in this metaphor. “Denied” suggests that someone took his sight. This reveals both the speaker’s anger over losing his sight and his inability to express this anger at God.