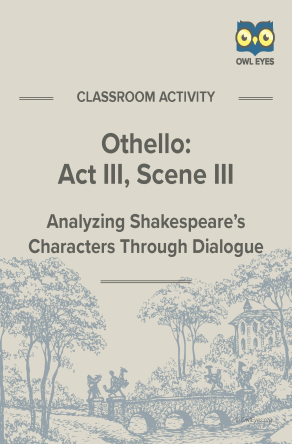 In The Tragedy of Othello, Shakespeare creates a tragic hero who is destroyed by fatal flaws in his own character. Driving Othello’s tragedy is his pride and personal insecurity, qualities that make him vulnerable to jealousy and suspicion. A valiant and respected general in service to the duke of Venice, Othello is led to believe that his wife, Desdemona, has betrayed him by carrying on an adulterous affair with Michael Cassio, one of his lieutenants. Sick with jealousy and rage, Othello eventually smothers Desdemona with a pillow as she begs for her life, and he subsequently kills himself when he learns that she had been innocent. The villain orchestrating the drama is Iago, Othello’s ensign, who seeks revenge for Othello’s promoting Cassio over him. Iago’s secret and malignant intentions are established immediately in act I, and the plot unfolds as he carries them out. In act III, scene III, Iago manipulates Othello to ingratiate himself, condemn Cassio, and destroy Othello’s peace and happiness by convincing him that Desdemona is unfaithful. Also appearing in the scene are Desdemona; Iago’s wife, Emilia; and Cassio.