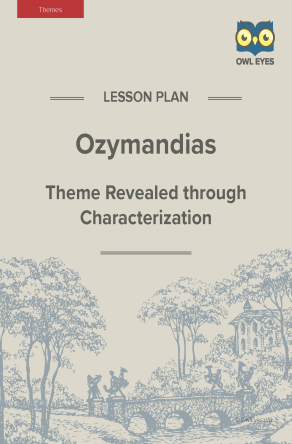 Theme Revealed through Characterization in “Ozymandias”

This lesson plan focuses on how Shelley characterizes Ozymandias in the poem and how his characterization contributes to the development of the major theme in the text: The mighty will fall, their power and glory obliterated by time. Students will identify different methods of characterization at work in the poem, locate examples of them, and infer what the examples reveal about Ozymandias. Students also will interpret connotative language and imagery in the text and examine how they emphasize Ozymandias’s character traits. In studying how Ozymandias is developed as a character, students will be better able to identify and describe the major theme in the poem.

Complex in structure and universal in themes, Shelley’s “Ozymandias” is a remarkable sonnet, a work of 19th-century English Romanticism that continues to elicit literary analysis and commentary.

The poem, first published in 1818, was inspired by the inscription on a huge statue of Ramses II (known as Ozymandias in Greek), the all-powerful pharaoh who ruled Egypt for sixty-six years in the 13th century BCE, vanquishing all enemies and building an empire. The inscription, as described by Greek historian Diodorus Siculus c. 1 BCE, implies much about the character of Ozymandias:

“King of Kings Ozymandias am I. If any want to know how great I am and where I lie, let him outdo me in my work.”

The statue with Ozymandias’s arrogant challenge had ceased to exist long before Shelley wrote about it, but the statue and the pharaoh himself are immortalized with brilliant poetic license in Shelley’s sonnet. It’s certain, however, that Ozymandias would not have appreciated Shelley’s depiction of him and the ultimate fate of his kingdom.

The predominant literary device that drives “Ozymandias” is irony, enriched through a dramatic contrast between the present and the ancient past. The time motif is introduced at the beginning of the poem and revisited dramatically at the conclusion. Also at work in the poem is a shifting point of view that emphasizes the passage of time.

The heart of the sonnet, however, is Shelley’s description of the statue. An enormous sculpture in stone intended to commemorate forever the greatness of Ozymandias, it has been obliterated almost entirely by time. Only pieces of the statue remain, littering the floor of the vast, empty desert in mute testament to the arrogance of tyranny, the ephemeral nature of power, the relentlessness of time, and the inescapable mortality of humankind. Among the pieces of the statue is one portraying the face of Ozymandias. Shelley’s description of his countenance, coupled with the statue’s ironic inscription, provides insight into Ozymandias’s character, further developing the poem’s themes.

To identify Ozymandias’s character traits, consider what we learn about him directly and what we can infer (conclude) about him, based on the text of the poem.

Working together and referring to the text, complete this chart. Part of it is completed for you to serve as an example.

What Ozymandias did: He had a huge statue of himself made by a sculptor and dictated the words inscribed on the statue

What it reveals about him directly: He had great power

What it implies: He wanted to glorify himself

Sum it up: What kind of ruler does Ozymandias seem to have been?