Are you a teacher? Subscribe today to access hundreds of premium teaching resources and lesson plans! close
close
close
close
« Library « Primary Sources « Remarks to the Senate in Support of a Declaration of Conscience 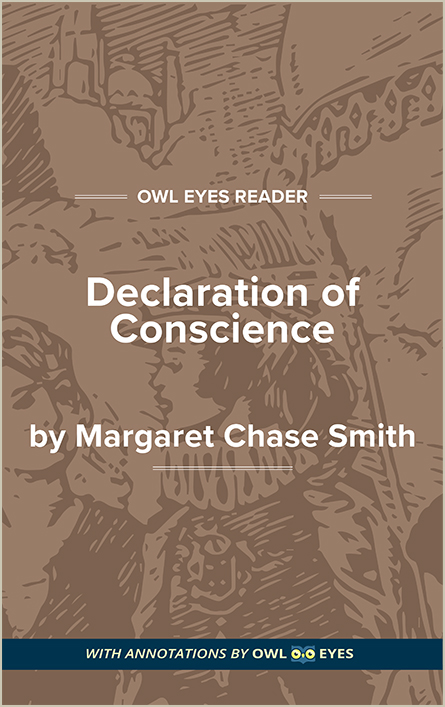 Remarks to the Senate in Support of a Declaration of Conscience

On June 1st, 1950, Senator Margaret Chase Smith (1897–1895) delivered her “Declaration of Conscience” speech from the Senate floor. In 1950, the Cold War (1947-1991) between the United States and the United Soviet Socialist Republic was escalating, and Communism was a source of fear throughout the united States. In February, 1950, Senator Joseph McCarthy (1908-1957) delivered a famous speech to the Republican Women’s Club of Wheeling, West Virginia, in which he claimed to have the names of 205 Communists who had infiltrated the US Government. His popularity increased and he began a campaign of defamation against many prominent politicians, government employees, and film industry professionals, which cost many people their jobs and reputations. Senator Smith was the first major Government official to criticize McCarthy, issuing her “Declaration of Conscience” in an attempt to convince her fellow Senators to avoid resorting to such divisive and slanderous tactics. She rejects the pathos-driven rhetoric of fear and prejudice that McCarthy relied on and instead speaks “briefly and simply” about the responsibility of the Senate to uphold American values and do right by the American people. She grounds her criticisms in the founding documents and principles of the United States, advocating national unity and freedom of speech rather than fear, mistrust, and reckless accusation.