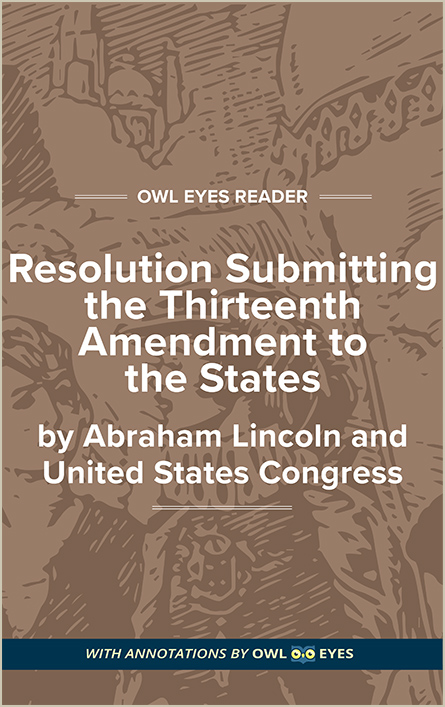 Resolution Submitting the Thirteenth Amendment to the States

The Thirteenth Amendment to the Constitution addressed the largest issue of American politics in the mid-19th century: slavery. Before the passing of the amendment, slavery had been implicitly legal because of a clause in the original 1787 US Constitution known as the “Three-Fifths Compromise.” According to this compromise, each slave was considered three-fifths of a citizen, a provision included so the slave-holding states could count them in census data to acquire more seats in Congress. By the 1850s, however, a storm of anti-slavery sentiment was brewing in the North, leading to a deepening conflict between the Northern and Southern states. In 1861 this conflict erupted in the Civil War, the bloodiest war in American history. As early as 1860, President Abraham Lincoln began to seek out ways to abolish slavery. In January of 1863, Lincoln issued the Emancipation Proclamation, an executive wartime order which freed the slaves held in the Confederate states. Concerned that the proclamation would be overturned, the Republican members of Congress began to formulate a more permanent law. In April of 1864, Congress passed the Thirteenth Amendment to the Constitution, which formally prohibited slavery and involuntary servitude from the United States. It was passed in the House of Representatives on January 31st, 1865, and signed by President Lincoln two days later on the 1st of February. When it was finally ratified by the states in December of that year, the Thirteenth Amendment made history, and became the first of three amendments passed in the Reconstruction Era.