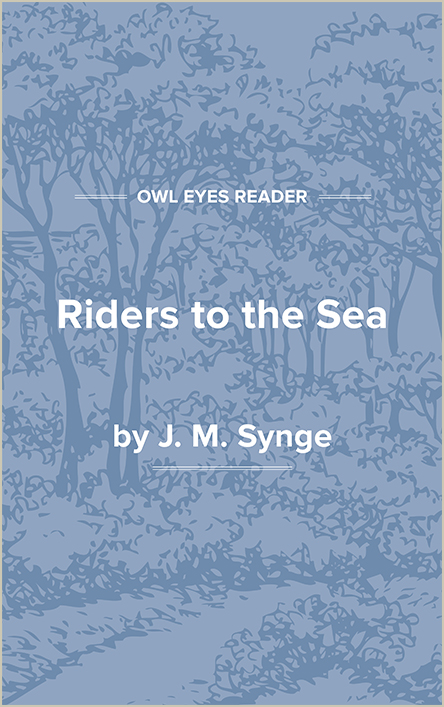 The first of Synge’s two masterworks, Riders to the Sea did not encourage censure or controversy when first performed, but it stands as a perfect articulation of themes and ideas that appear in later plays. Events take place entirely in a single room as two sisters, Cathleen and Nora, hide from their mother, Maurya, the news that their brother Michael, a fisherman lost at sea, has washed ashore far north of their cottage. The remaining son, Bartley, sets off to sign on with another departing fishing vessel, after Maurya fails to persuade him to stay. No sooner is Michael’s death confirmed than Bartley is thrown from his horse into the sea, where he also drowns.

The complex appreciation that Synge held for nature is evident in the play; it is depicted as a grandly magisterial force that envelops and exceeds all life and human comprehensibility. It is seen as a cruel master, remorselessly taking life out of the world, leaving the destitute even more impoverished. As Maurya reveals, she has lost eight men in her life to the implacable forces of nature, and the same universal patterns that Synge detected on the Aran Islands are at play here.

The setting and characters reveal Synge’s interest in peasant life, and the play offers a clear glimpse into the realities of a rural family. Details of domestic economy, farm duties, livestock trading, and fishing are presented with delicate precision. These activities, however—specific as they are to these lives—are significant for revealing a broader human condition. All people must struggle against the contingencies of their lives, and death, nature’s great inevitability, visits everyone. The impulse to depict these people as quaint or noble is suppressed; instead, the raw realities of their existence are placed squarely before the reader.

The harshest of these realities is the sense of doom and foreboding that hovers about the play. The sisters resist accepting Michael’s death until they examine the paltry remnants recovered from the ocean. Both Maurya and the reader know that he is dead, and when...