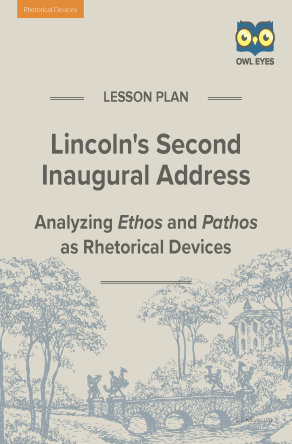 This lesson focuses on how Lincoln employs two specific rhetorical devices in “Second Inaugural Address.” Students will identify and analyze examples of ethos and pathos in the text and explain why they are effective in the context of Lincoln’s historical era and his audience. By studying Lincoln’s appeals to ethos and pathos, students will be better able to describe his purposes in the speech.

The American Civil War began one month into Abraham Lincoln’s first term as president in direct response to his election. The Southern states feared that he would try to end slavery. In fact, Lincoln devoted much of his campaign and his “First Inaugural Address” to promising not to end slavery. As he claimed, “I have no purpose, directly or indirectly, to interfere with the institution of slavery in the States where it exists. I believe I have no lawful right to do so, and I have no inclination to do so.”

Lincoln began his second term as President of the United States while the Civil War was still being fought. He had struggled in his re-election campaign. The country was weary of the war, and the public doubted whether he could end the conflict. However, the tide turned in the Union’s favor just before the election when Union General William T. Sherman captured the crucial Confederate city of Atlanta in September of 1864. On the day of Lincoln’s second inauguration, it seemed that the war would soon be over, that the Union would remain intact, and that slavery would end. Lincoln now had to turn his attention to governing a fragile, wounded, and divided nation.

In his “Second Inaugural Address,” Lincoln seeks to unify the country, but he also reminds his audience why fighting the Civil War has been necessary. He identifies slavery as the cause of the war, and his arguments against it reveal that his attitude toward slavery has changed significantly since he first assumed the presidency. He portrays slavery as a shared national sin that must be eradicated. Placing slavery in a religious context, he alludes to God’s will and passages from the Bible. Also, with vivid images Lincoln emphasizes the cruelty of slavery, which, he contends, justifies the magnitude of the response to end it.

Lincoln’s “Second Inaugural Address” is considered one of the finest speeches by one of the United States’ greatest orators. Lincoln’s genius lay in his ability to communicate complex ideas simply and evoke an emotional response in the audience, often through the use of rhetorical devices. While Lincoln’s “Second Inaugural Address” lasted only 6 or 7 minutes, it illustrates the power of rhetorical devices in exposition. By the end of his brief speech, Lincoln had effectively addressed his two objectives: to justify fighting the Civil War to end slavery and to call for unity, peace, and compassion among all Americans as the country moved forward after the war.

Paragraph 1: Fellow-countrymen: At this second appearing to take the oath of the presidential office, there is less occasion for an extended address than there was at the first. Then a statement, somewhat in detail, of a course to be pursued, seemed fitting and proper. Now, at the expiration of four years, during which public declarations have been constantly called forth on every point and phase of the great contest which still absorbs the attention and engrosses the energies of the nation, little that is new could be presented. The progress of our arms, upon which all else chiefly depends, is as well known to the public as to myself; and it is, I trust, reasonably satisfactory and encouraging to all. With high hope for the future, no prediction in regard to it is ventured.