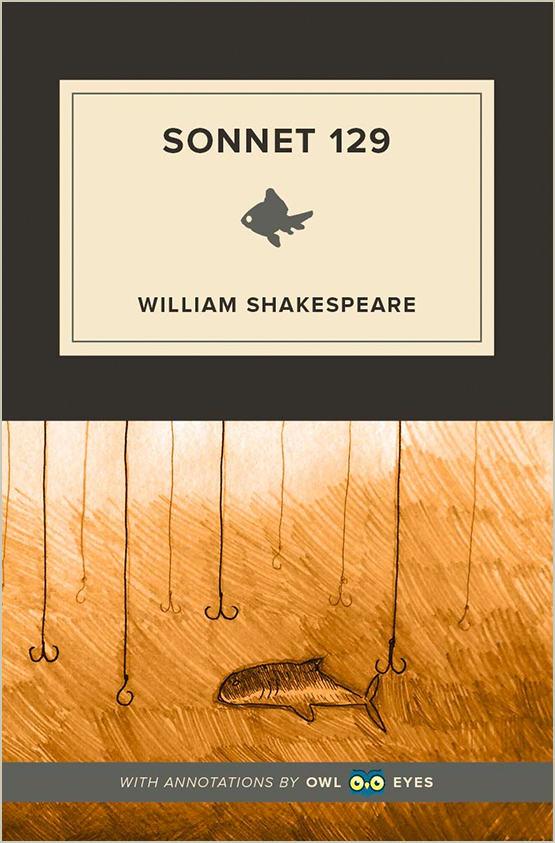 Except for the closing couplet, sonnet 129 consists of single run-on sentence. This structure, built around the single simile in lines seven and eight, creates a claustrophobic sense that culminates in an explosive outburst, a feeling which mirrors the conflicting emotions that accompany sexual lust. The final couplet, which stands apart from the rest of the sonnet, admits that the necessity for sex is universal and timeless—each generation must learn anew to be wary of the pitfalls of love and desire.

In Shakespeare’s 1594 narrative poem The Rape of Lucrece, the Roman prince Tarquin rapes the noblewoman Lucretia. The poem explores the overlapping natures of sexuality and violence much in the way that Sonnet 129 does. The two poems also share the notion of sex as a fleeting “dream.” As Tarquin says, “What win I if I gain the thing I seek?/A dream, a breath, a froth of fleeting joy” (Lucrece 211-12).

The shift from “proof” to “proved” marks the transition from “bliss” to “woe.” This is one of the poem’s central themes: that the sexual act is a momentary bliss that leads to unnecessary anguish. The line’s construction prefigures the poem’s final line such that “bliss” parallels “heaven” while “woe” parallels “hell.”

“Spirit” was a common euphemism for an erection that came from the phrase “to raise a spirit.” “Spirit” can also mean one’s soul, figuratively meaning he has wasted his soul by enacting this sin. Here, the speaker introduces the spiritual crisis that he will explore throughout the poem using sexual metaphors.