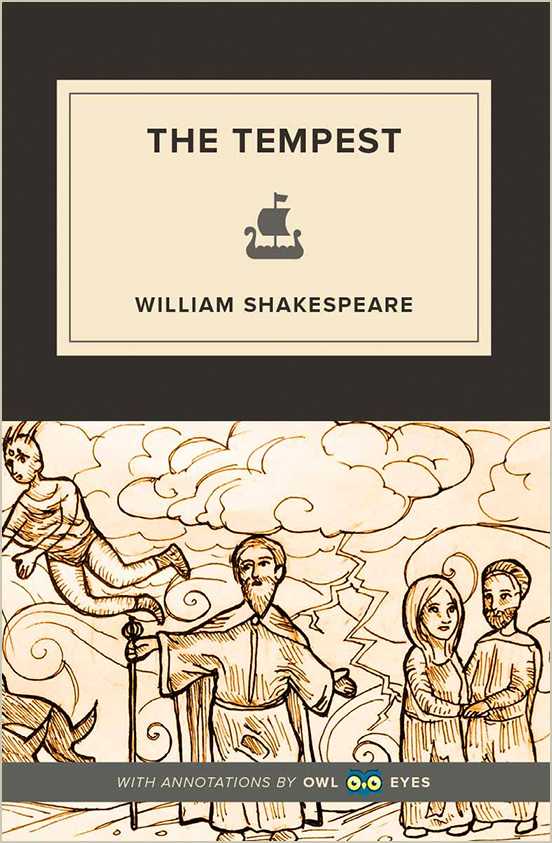 Alonso, the king of Naples, is returning from the wedding of his daughter to a foreign prince when his ship is overtaken by a terrible storm. In his company are Duke Antonio of Milan and other gentlemen of the court. As the gale rises in fury and it seems certain the vessel will split and sink, the noble travelers are forced to abandon ship and trust to fortune in the open sea.

The tempest is no chance disturbance of wind and wave. It was raised by a wise magician, Prospero, when the ship sails close to an enchanted island on which he and his lovely daughter, Miranda, are the only human inhabitants. Theirs is a sad and curious history. Prospero is the rightful duke of Milan, but being devoted more to the study of philosophy and magic than to affairs of state, he gave much power to his ambitious brother, Antonio, who twelve years earlier seized the dukedom with the aid of the crafty Neapolitan king. Prospero and his small daughter were set adrift in a boat by the conspirators, and they would have perished miserably had not Gonzalo, an honest counselor, secretly stocked the frail craft with food, clothing, and some of the books Prospero valued most.

The exiles drift at last to an island that is the refuge of Sycorax, an evil sorceress. There Prospero found Caliban, her son, a strange, misshapen creature of brute intelligence, able only to hew wood and draw water. In addition, there were many good spirits of air and water who became obedient to Prospero’s will when he freed them from torments to which the sorceress Sycorax had condemned them. Chief among these is Ariel, a lively sprite.

Prospero, using his magic arts to draw the ship bearing King Alonso and Duke Antonio close to his enchanted island, orders Ariel to bring the whole party safely ashore, singly or in scattered groups. Ferdinand, King Alonso’s son, is moved by Ariel’s singing to follow the sprite to Prospero’s rocky cell. Miranda, who does not remember ever seeing a human face other than her father’s bearded one, at first sight falls deeply in love with the handsome young prince, and he with her. Prospero is pleased to see the young people so attracted to each other, but he conceals his pleasure, speaks harshly to them, and, to test Ferdinand’s mettle, commands him to perform menial tasks.

Meanwhile Alonso, Sebastian, Antonio, and Gonzalo wander sadly along the beach, the king in despair because he believes his son drowned. Ariel, invisible in the air, plays solemn music, lulling to sleep all except Sebastian and Antonio. Drawing apart, they plan to kill the king and his counselor and make Sebastian tyrant of Naples. Watchful Ariel awakens the sleepers before the plotters can act.

On another part of the island, Caliban, carrying a load of wood, meets Trinculo, the king’s jester, and Stephano, the royal butler, both drunk. In rude sport they offer a drink to Caliban. Tipsy, the loutish monster declares he will be their slave forever.

Like master, like servant. Just as Sebastian and Antonio plot to murder Alonso, so Caliban, Trinculo, and Stephano scheme to kill Prospero and become rulers of the island. Stephano is to be king, Miranda his consort, and Trinculo and Caliban will be viceroys. Unseen, Ariel listens to their evil designs and reports the plan to Prospero.

Miranda disobeys her father’s injunction on interrupting Ferdinand in his task of rolling logs and the two exchange lovers’ vows, which are overheard by the magician. Satisfied with the prince’s declarations of devotion and constancy, Prospero leaves them to their happy company. He and Ariel go to mock Alonso and his followers by showing them a banquet that vanishes before the hungry castaways can taste the rich dishes. Then Ariel, disguised as a harpy, reproaches them for their conspiracy against Prospero. Convinced that Ferdinand’s death is punishment for his own crime, Alonso is moved to repentance for his cruel deed.

Returning to his cave, Prospero releases...