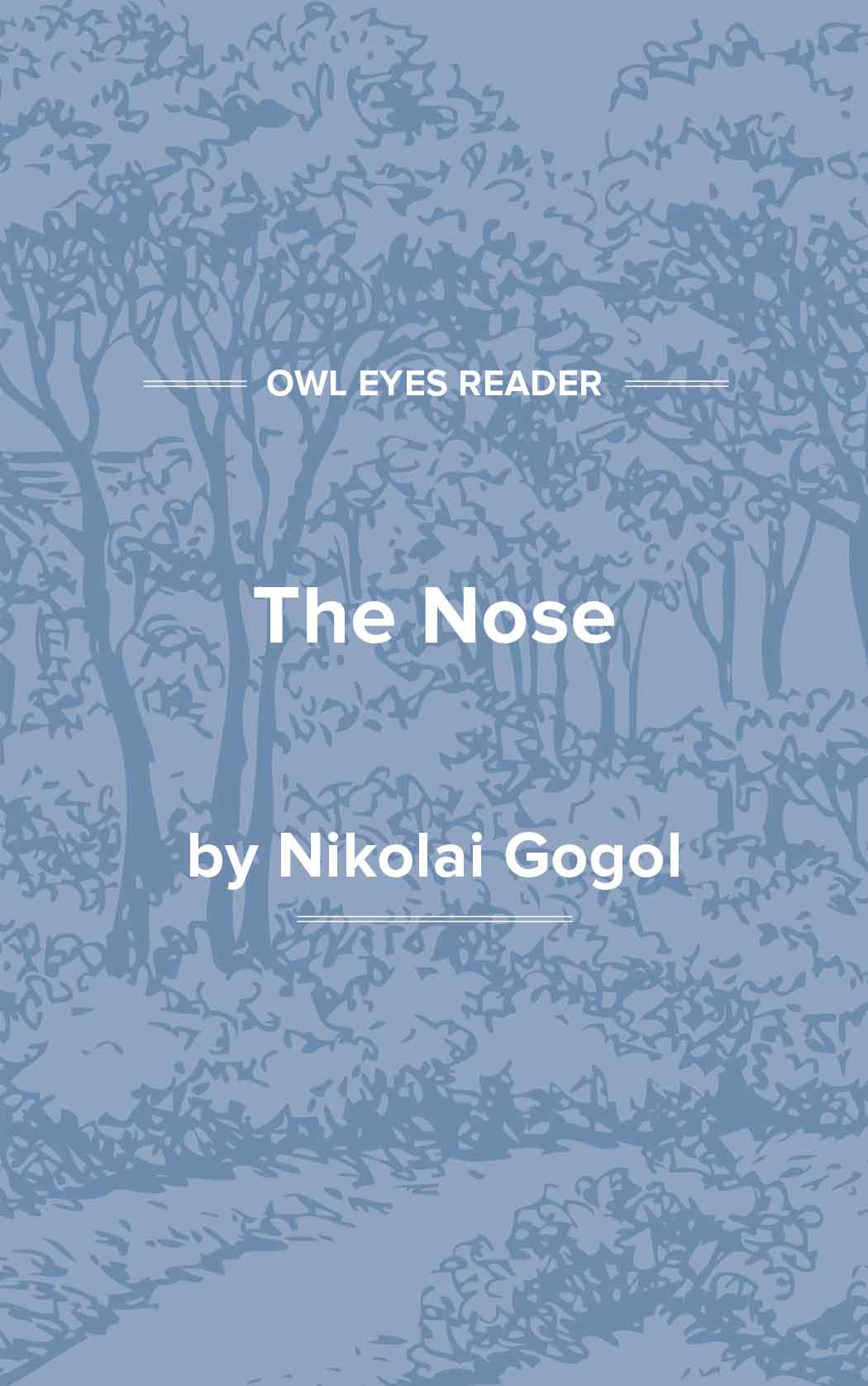 Much has been made of the “nose” theme in Gogol’s work “The Nose.” American writer Vladimir Nabokov, in his interpretation, rejects the Freudian view that, in Gogol’s topsy-turvy world, the nose represents a misplaced phallus, and that his literary fixation on noses, sneezes, snuff, stinks, scents, and the like evidences his own uncertain sense of sexual identity. Instead, Nabokov attributes Gogol’s “olfactivism” to a general nasal consciousness in the Russian culture that was made more acute in Gogol’s work because of the peaked prominence of his own nose. Whatever the origin, Gogol’s tale is “verily a hymn to that organ.”

St. Petersburg barber Ivan Yakovlevich awakes to find a nose baked into his breakfast bread. He recognizes the nose as that of his recent customer, Major Platon Kovalyov, a collegiate assessor in the municipal government. Harangued by his wife, he seeks to dispose of the nose by wrapping it in a cloth and throwing it into the water below the Isaac Bridge. He is observed in this act, however, by a policeman. Kovalyov awakens, looks in the mirror, and notices that his nose is missing. He is most upset about this, so he covers his face with a handkerchief and walks out onto Nevsky Prospect to seek aid. His sense of embarrassment prevents him from approaching anyone, however, and his discomfiture is greatly increased when, in front of a confectionary shop, he encounters his nose exiting a carriage. Since his nose is wearing the uniform of an official of higher rank than his, Kovalyov importunes the nose very politely to return to his face. The nose, however, is indignant and denies that there can be any close ties between them, before haughtily walking away.

Kovalyov goes to seek the aid of the chief of police, but the chief of police is not at home. Kovalyov realizes that he must act on his own to effect the return of his nose. He contemplates advertising in the newspaper for its return but rejects the idea. At this point, the policeman who had observed Yakovlevich throwing the nose off the Isaac Bridge comes to Kovalyov’s house to inform him that the nose “had been arrested just as it was getting into a carriage for Riga.” The nose is now returned to Kovalyov in its cloth wrapping. Kovalyov is very grateful, but he does not know how to stick the nose back onto his face. A physician whom he consults on the matter is of no help at all.