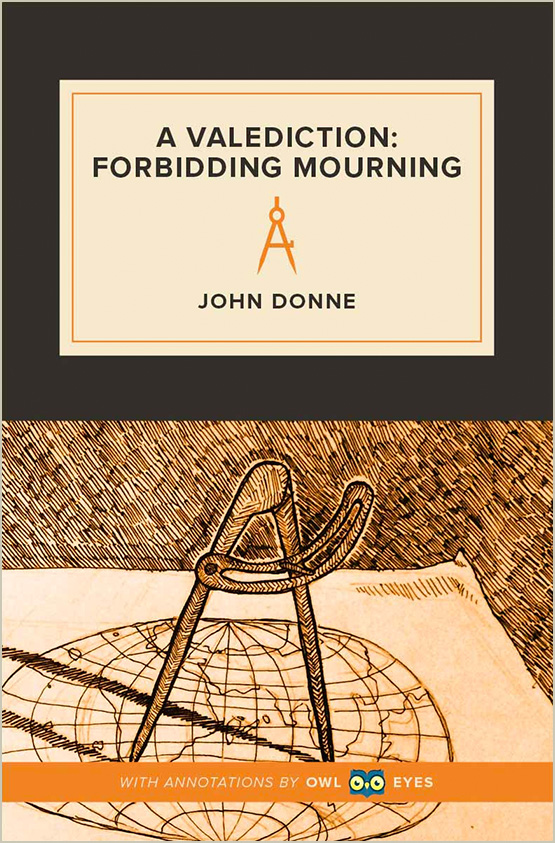 Themes in A Valediction: Forbidding Mourning

Love: This poem is primarily concerned with the love between the speaker and his significant other. The speaker argues that even though he will be separated from his love by distance and circumstance, their love will remain true and pure. He develops this argument by crafting metaphors that describes their love as separate from their physical bodies. Their love exists between their two minds and cannot be compromised or lessened by physical distance. Donne compares them to the legs of a mathematical compass to illustrate that the lovers are two separate entities of a connected whole.

Death: The poem begins with an illustration of death. Donne describes a group of people gathered at the deathbed of a virtuous man trying to determine which breath will be his last. The abrupt turn from death to life in the second stanza is reminiscent of Carpe Diem poetry. Carpe Diem poetry largely uses illustrations of death to encourage a greater appreciation for the beauty and impermanence of life. The illustration of death here creates the same effect: the speaker wants his paramour to appreciate the beauty of their love.

Again, this “makes” refers to the woman’s firmness. If she is firm then he will be able to end where he began. In other words, if she is faithful, he will return to her. While these two concluding lines are famous for their romantic sentiment, the conditional nature that the “makes” brings into this line implies a deeper meaning than just romantic sentiment.

This is the first instance in which the speaker distinguishes their love as that which makes them better than mere mortals, a theme which will continue for the rest of the poem.

By this the speaker means someone who is not of the clergy, or religious orders. The speaker uses this word to distinguish his love from the lay or mortal world and implicitly make the lovers part of a religious or other worldly realm.

"Inter-assurèd of the mind, Care less eyes, lips and hands to miss..."  See in text (A Valediction: Forbidding Mourning)

These two lines explain how their love lives within their minds, such that they won't miss each other when they can't see one another or touch each other's eyes, lips, or hands.