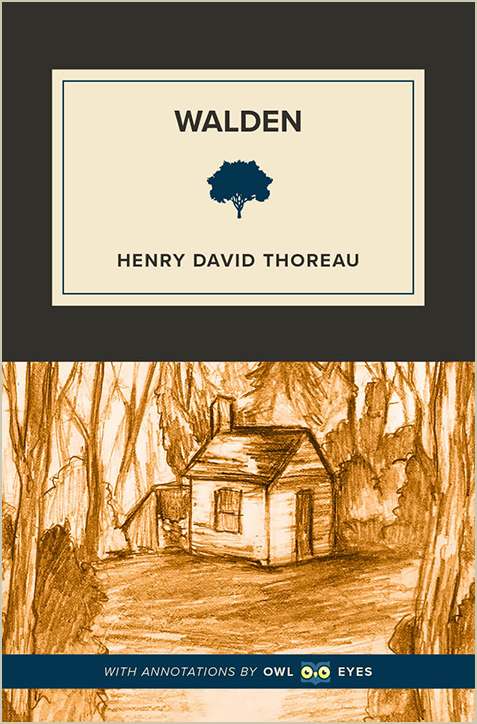 In 1845, when he was twenty-seven years old, Thoreau built a one-room cabin on Emerson’s land in the woods on the shore of Walden Pond, less than two miles from Concord. He borrowed an axe, bought the boards from an Irish railroad worker’s shanty, and erected a ten-by-fifteen-foot building. He moved into his new abode on the symbolic date of Independence Day.

There he lived austerely, growing beans and doing odd jobs, living on a simple diet, and spending less than nine dollars for food during the first eight months. His plan was to simplify his life, to “live free and uncommitted,” working about six weeks a year in order to have the remaining forty-six weeks free to read, write, live in intimate relationship to nature, “affect the quality of the day,” and demonstrate the Transcendental belief in “the unquestionable ability of man to elevate his life by a conscious endeavor.” He summed up his experiment by writing:I went to the woods because I wished to live deliberately, to front only the essential facts of life, and see if I could not learn what it had to teach, and not, when I came to die, discover that I had not lived. . . . I wanted to live deep and suck out all the marrow of life, to live so sturdily and Spartan-like as to put to rout all that was not life, to cut a broad swath and shave close; to drive life into a corner, and reduce it to its lowest terms, and, if it proved to be mean . . . to get the whole and genuine meanness of it, and publish its meanness to the world; or if it were sublime, to know it by experience, and be able to give a true account of it.

Feeling that most people live hurried, complicated “lives of quiet desperation,” “frittered away by detail,” he urged them to simplify. Citing the case of an Indian craftsman whose baskets people would no longer buy, Thoreau set an example for poor students and for would-be artists, who fear being unable to make a living by their writing, painting, music, or sculpture. Believing that many people were enslaved too much by working at unfulfilling jobs to provide themselves with material objects, he showed that if they will do with less, they can find the freedom to pursue their heart’s desire. Like Thomas Carlyle, the English Transcendentalist friend of Emerson, Thoreau urged people to lower their denominator—to enrich the spiritual quality of their lives by reducing their dependence on the material by choosing “the vantage point of what we should call voluntary poverty,” for“a man is rich in proportion to the number of things which he can afford to let alone.”

Walden functions on several levels. As autobiography, it resembles Walt Whitman’s “Song of Myself” (1855), for like Whitman, Thoreau wrote, “I should not talk so much about myself if there were anybody else whom I knew so well.” Leon Edel places Walden among the literature of imaginary voyages. On the autobiographical and documentary level, it has affinities with Robinson Crusoe’s solitary and self-reliant life on his island; its documentary detail also resembles Herman Melville’s accounts of South Seas culture and of whaling, while on another level, it is like the voyage of the Pequod in his Moby Dick (1851) as a quest for ultimate spiritual reality.

Emerson complained of Thoreau’s fondness for leading huckleberry parties, and as a “drop-out” from “this chopping sea of civilized life,” Thoreau resembles Huckleberry Finn fleeing from “sivilization,” the Walden cabin and Huck’s raft both...