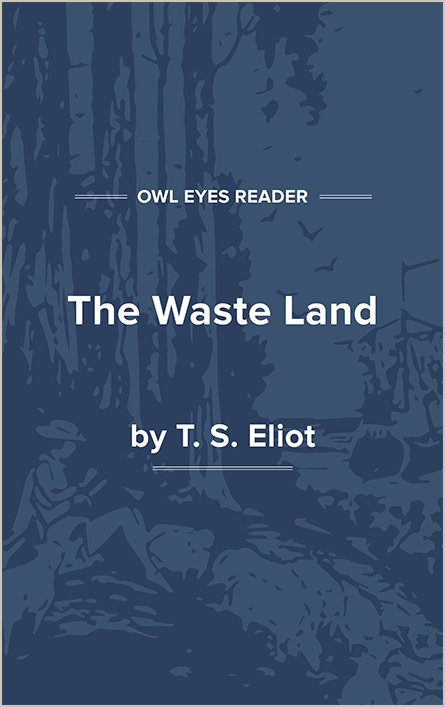 Themes in The Waste Land

Themes Examples in The Waste Land:

"I had not thought death had undone so many...."  See in text (Text of the Poem)

This is a direct quotation from Canto III of The Inferno by Dante Alighieri (1265-1321). In The Inferno, Dante remarks "I had not thought death had undone so many" after entering the gates of Dis, the subterranean city of the dead. Thus, Eliot's allusion equates London to hell and the throngs of Londoners to the countless dead. The comparison is metaphorical, for the Londoners are not literally dead, but perhaps spiritually so.

"Madame Sosostris, famous clairvoyante, Had a bad cold, nevertheless Is known to be the wisest woman in Europe, With a wicked pack of cards...."  See in text (Text of the Poem)

T. S. Eliot's speaker seems to be illustrating the kinds of superstitions that would revive following the dissolution of traditional religion. In the absence of shared religious beliefs, mankind might revert to ancient beliefs in such things as fortune telling, astrology, numerology, palm reading, and spiritualism (communing with the dead). Madame Sosostris represents a figure who offers these rituals.

This line is an allusion to a poem Shakespeare wrote into Act 1, Scene 2 of The Tempest, sung by Ariel. The poem is about transformation, and Eliot returns to its language again, with—fittingly—slight transformations. The eight-line poem, which is often anthologized as "A Sea Dirge," is as follows:

Full fathom five thy father lies.
Of his bones are coral made;
Those are pearls that were his eyes;
Nothing of him that doth fade
But doth suffer a sea-change
Into something rich and strange.
Sea-nymphs hourly ring his knell:
Hark, now I hear them,—Ding-dong bell.