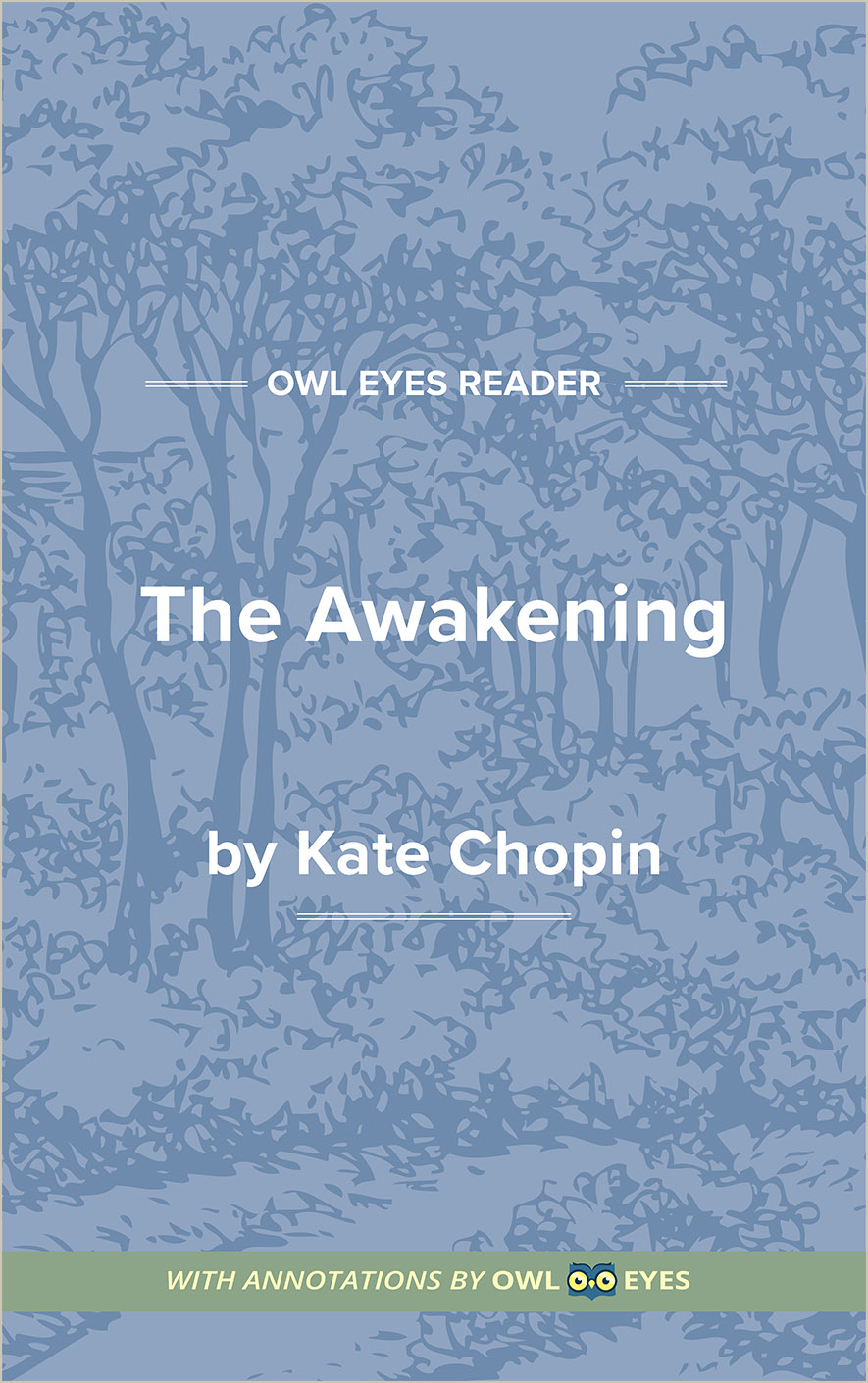 Plot in The Awakening

Plot Examples in The Awakening:

"“You are burnt beyond recognition,” he added, looking at his wife as one looks at a valuable piece of personal property which has suffered some damage...."  See in text (Chapter I)

Chopin’s description of how Mr. Pontellier looks at his wife tells us that he sees Edna not as someone with an independent mind and will but as an object of value that needs to be protected. This first chapter serves to show the tension between Edna and her husband by revealing how restricted Edna’s life is: Mr. Pontellier scolds her rather than acknowledging her desire to spend time outside.

"An indescribable oppression, which seemed to generate in some unfamiliar part of her consciousness, filled her whole being with a vague anguish. It was like a shadow, like a mist passing across her soul's summer day..."  See in text (Chapter III)

Even though this exchange with her husband is common to her life, Edna has a strong reaction to the authoritarian nature of her husband’s conduct. This “unfamiliar shadow” could be interpreted as a feeling of injustice that Edna has not heretofore acknowledged. This moment marks the beginning of Edna’s awakening.

"A thousand emotions have swept through me to-night. I don't comprehend half of them...."  See in text (Chapter X)

Edna tries to explain to Robert all of her newfound emotions, revealing her confusion at the newness of them and her worry that she may never experience them again. These defining moments have awakened her from a life that was dependent, obedient, and passive to one that is full of new life and powerful sensations.

"She was blindly following whatever impulse moved her, as if she had placed herself in alien hands for direction, and freed her soul of responsibility...."  See in text (Chapter XII)

The alien hands could be interpreted as her own hands. She is no longer held by the social responsibilities that she has but rather by her burgeoning desires.

"Edna vaguely wondered what she meant by “life's delirium.” It had crossed her thought like some unsought, extraneous impression...."  See in text (Chapter XVIII)

Edna’s awakening is a vague, intangible change. She cannot concretely say what has been awakened, what she cannot let go of, or what it feels like. This suggests that the true nature of Edna’s awakening is in its vagueness: unlike her life, it is unstructured and unregulated.

"The little glimpse of domestic harmony which had been offered her, gave her no regret, no longing. It was not a condition of life which fitted her, and she could see in it but an appalling and hopeless ennui. She was moved by a kind of commiseration for Madame Ratignolle,—a pity for that colorless existence which never uplifted its possessor beyond the region of blind contentment, in which no moment of anguish ever visited her soul, in which she would never have the taste of life's delirium...."  See in text (Chapter XVIII)

In this acknowledgement, Edna recognizes that it is not her marriage nor her husband that brings her unhappiness. It is the institution of marriage and the role of women in her society in general that will never satisfy her. While she bemoans the loss of Robert and the boredom she feels in her everyday life, the heart of her issue is her inability to live in a world that acknowledges and values her individuality.

Edna’s resolve weakens as the night wears on, and she no longer rejects Arobin’s advances. Notice that in contrast with Robert, Edna’s connection with Arobin is physical rather than intellectual. Arobin is thus associated with the body and outward appearances rather than the mind and Edna’s inner self.