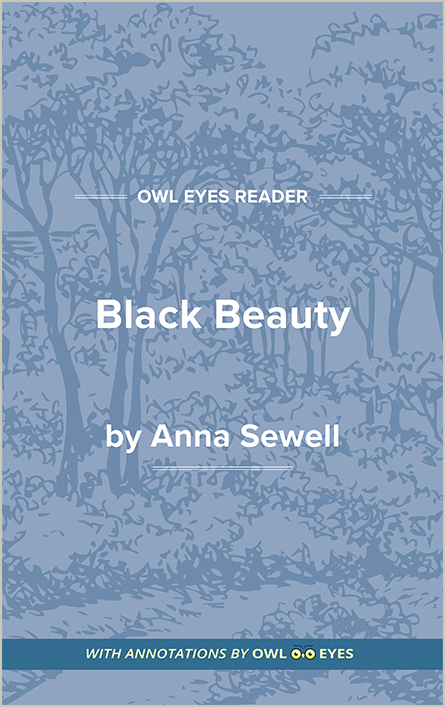 Newmarket Racecourse is located in Suffolk, England. It is the unofficial home of all thoroughbred horse racing in England as well as many of the largest horse training yards and horse training organizations in the country.

Church bells ringing generally signals some important occasion, such as a weddings or a funeral. In this case, it is a funeral.

When a horse breaks a leg, it is generally shot or euthanized because it is a very painful injury; it is difficult for a horse to recover from this injury because of the constant pressure on the leg when the horse walks or even stands.

Blinkers are used to keep a horse from looking to the rear but also often to the sides in order to avoid being startled or distracted.

The forge at a blacksmith's shop is a hot furnace used to heat and shape metals into useful items, such as horseshoes.

This is a leather or leather-and-metal collar hung around a horse's neck from which the horse can be attached, with traces, to a plow or wagon.

This is the process of preparing a horse to accept a halter, bridle, harness, and saddle so he will be trained and equipped to carry a rider.

Bran mash is a warmed mixture of wheat bran and water and any number of other things (most often carrots and molasses).

Gypsies once relied almost exclusively on horses for transportation; when that no longer became necessary, they began to breed horses. A gypsy horse is thought to have something magical, or perhaps enchanting, about them.

In the Lutheran or Episcopalian churches, a vicar is a lay (non-clergy) assistant to the pastor. In the Church of England, a vicar is the priest.

Docking is the process of shortening done to some animal tails (primarily puppies) mostly when they are young, sometimes for fashion or vanity, but often done for more practical reasons.

A gag bit (placed in the horse's mouth) is used for horses who need to be restrained or by owners who are determined to maintain control of their horse.

The height of a horse is measured by hands. A hand is officially four inches (101.6 millimeters), so this horse is 62 inches (just over five feet) tall.

A horse known as a "gray" actually does not start out gray; the hair gradually silvers over time due to depigmentation. A gray's nose and skin are usually black.

Four crossways is the place where two roads go in different directions across, like in a four-way intersection.

Eighteen shillings is worth about a pound in British currency of the day (twelve pence per shilling, twenty shillings per pound).

The phrase "fox's tail" is a reference to the sometimes reckless things hunters had their horses (and therefore themselves) do when hunting for fox; fox tails were collected rather like sporting trophies.

Many hills in England are named "Beacon Hills" because warning beacons around the country were placed on them.

A unit of British money, the shilling was worth about twelve pence (the equivalent of a penny); three shillings, then, was worth roughly thirty-six cents.

Also known as a "spike," an English workhouse was a place where people who could not support themselves had to live and work until they were able to either get out of debt or survive on their own again. It was a hard place to live, so only those who had no choice would go there.

Many people died in epidemics of different fever outbreaks, such as yellow fever or typhoid fever. The specific fever is unknowable to us here, but people at that time would have been familiar with regional outbreaks of fever.

Newmarket is a small market town in the county of Suffolk in England. It was once considered the second capital of the country and is known as the home of horse racing in England.

Soothing syrups were another kind of quack medicine, made from morphine (among other things) and used to calm (sedate) those who were upset or agitated, including babies.

There is no evidence to suggest that this is a real person or a real story, though she may have been a local figure in the author's world.

Blood-letting was a medical procedure which was done on both humans and animals. The theory behind the practice was that the four body humors (fluids) had to be in balance for good health. Physicians generally tried to remove the amount of blood which they thought was in the hurt, sick, or diseased area (i.e., leg, arm). For hundreds of years, it was the primary treatment for every kind of disease or ailment.

During the summer, square chunks of the ground (turf) were cut (like sod) and then dried, to be burned like wood during the winter. Peat is the kind of ground which will burn most effectively.

The word "bay' refers to the most common horse color; having a reddish-brown coat with black mane, tail, ears, and feet.

The Union House is the the local poor house, a place where the needy or dependent (poor) went when they could not support themselves.

Bath is a city southwest of London known for its hot springs and restorative (healthy) waters.

A curb bit is a horse bit that increases the leverage and therefore the pressure that a rider can put on the horse in order to exert more control of the animal.

A dun horse can range in color from gray to tan; however, it will always have a dark stripe running down the center of its back and have a face, mane, and tail which are darker than the rest of its coat. It is also likely to have a darker face and legs than the rest of its body. The word "dun" actually refers to the dun gene (a dilution gene) which these horses have.

A powdered active lime (the mineral, not the fruit), when spread over a smelly place, will help eventually eliminate the order.

An apple turnover is a folded pastry folded over diced apples and baked, eaten as a dessert.

A sausage dumpling is kind of like biscuits and gravy, but the biscuits are baked on top of the gravy.

Not a literal governor (elected official); instead a polite greeting given to a gentleman (similar to "sir").

Gas lamps were the early version of street lights, gas lanterns were either affixed (attached) to or hung from wrought iron poles, and every evening someone would light them.

Twenty three pounds is roughly $38, though that amount would certainly have bought more then that it would today.

A great coat is a long, heavy (warm) overcoat; this one is gray with large white buttons and also has a cape in the back.

The mouth is the end of the cannon from which cannonballs both enter and exit.

"St. Vitus' dance" refers to the jerky, uncontrolled movements which are typical of those who have one of many diseases; this reference is to a disease called chorea, a movement disorder.

A reference to the Ten Commandments, found in Exodus 20, given by God through Moses to His people.

Dover is a city on the southeastern coast of England, known for its famous chalk-white cliffs.

Cheapside is a street in London, known today as the financial district.

The sovereign is a gold coin equal to one pound sterling—a lot of money, in other words.

Pickpockets are petty thieves who steal from people's bags, purses, and (of course) pockets.

A knacker is someone who gets rid of dead animal carcasses, especially those which cannot be used for food, by turning them into something more useful. A horse carcass would often have been used to make dog food and glue, for example.

Orange is the color of the British political party which promotes the unions.

Blue is the color associated with the conservative party in British politics.

A lunatic asylum is a psychiatric hospital; a place where people suffering from mental illness are treated and often kept.

A bridge in central London which crosses the Thames River; over the years, several bridges have been known as the London Bridge.

Bronchitis is the inflammation and swelling of the respiratory system, including lungs, trachea, and bronchial tubes; usually marked by severe coughing and the inability to breathe.