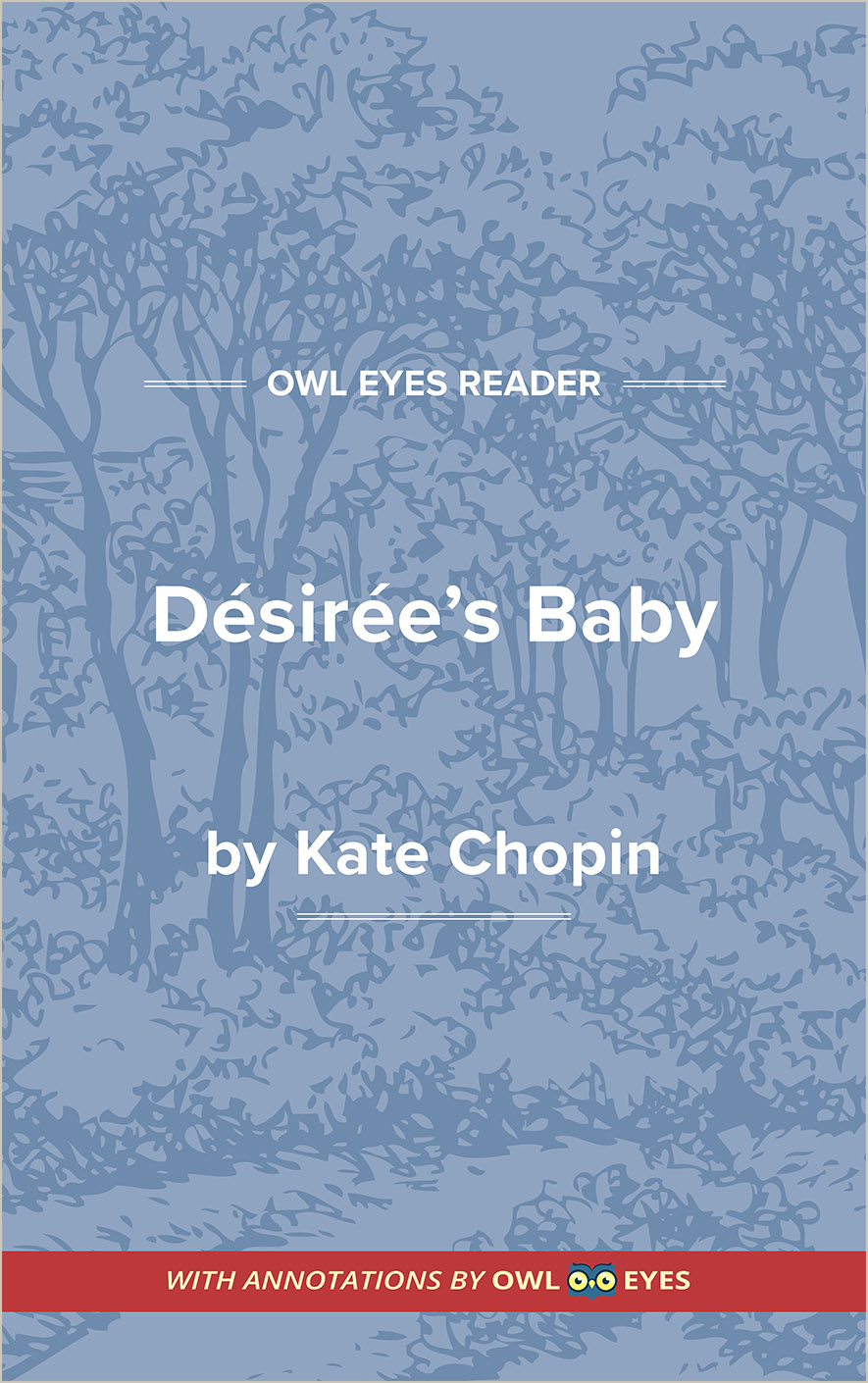 The Sequela of Sexism: One of the central tragedies of “Désirée’s Baby” is the way in which Armand treats Désirée on the basis of her sex. When the couple realizes that their baby may be of mixed racial origin, Armand immediately blames Désirée and denounces her. While his assumptions are based on her unknown origins, the structure of Southern society—with its implicit sexism—allows Armand to incriminate Désirée without resistance or consequence.

The Ravages of Racism: Racism is perhaps the defining element of the societies of the American South in the early to mid 19th century. This racism—which placed white above blacks—drives the plot of “Désirée’s Baby,” most notably through the behavior of Armand. Not only is Armand a slave owner, but also he is a violent, abusive one. When it is revealed that his child may not be entirely white, he falls into a terrible rage, casting Désirée out.

Although Armand’s “imperious and exacting nature” has been “softened” by love and the birth of his child, Désirée is still subject to his mood swings. During this time, women were expected to shape their lives around the needs and desires of their husbands. Désirée’s own moods and emotions are thus tied to Armand’s; if he is unhappy, so is she, with Désirée’s extreme emotional dependence on her husband reflects the sexist societal beliefs of the time.

Armand is powerful in a number of ways as a white, wealthy male in a patriarchal and racist society. When he is upset, the ways in which his power intersects is emphasized. Armand is violent towards his slaves, he determines both his wife’s happiness and her livelihood, and he even uses his power over his female slaves in atrocious ways. Armand’s mistreatment of those with less agency is intersectional in nature, complicating the theme of intersectionality and racism.

"belongs to the race that is cursed with the brand of slavery.”..."  See in text (Désirée's Baby)

In the letter that Armand reads from his mother, she writes that he “belongs to the race that is cursed with the brand of slavery.” This reveals that it is actually Armand who has black ancestry, not Désirée. This dramatic plot twist makes the ending of the story, and the story itself, all the more ironic and devastating. More specifically, Armand’s fate is extremely ironic. He has treated his wife and his slaves with violence and cruelty based on the color of their skin, and now he must face the fact that he is actually part-black himself.

"and it was he who dealt out to a half dozen negroes the material which kept this fire ablaze...."  See in text (Désirée's Baby)

After Désirée and the baby have disappeared, Armand decides to remove all traces of their existence by burning their possessions. If we recall the story’s last image of fire, which is associated with Armand’s burning passion for Désirée, then this passage becomes even more symbolic. Notice again the way that Chopin emphasizes Armand’s power as a wealthy white landowner. His slaves are actually doing the work here, and Désirée’s reputation is the only one that suffers, as a woman now believed to be part-black. She bears the societal “shame” of the situation, and he would have been largely unaffected.

Désirée’s decision to end her own life emphasizes just how deeply racist this society is. Désirée understands the social, political, and economic consequences that being mixed-race entails for both herself and her son. Chopin highlights the internalized racism that manifests from a society like this: Désirée now sees herself as inferior, as someone who is part African American. Her choice also signals the few options that women had during this time. Désirée has been dependant on Armand financially, and he has rejected her. While Désirée could have listened to her mother and returned to Valmondé, her confidence and self-esteem were so shattered by her husband and her position in society that she likely felt that she had no other recourse.

"He thought Almighty God had dealt cruelly and unjustly with him..."  See in text (Désirée's Baby)

Notice that the theme of fate and Providence is again emphasized here, but this time it is complicated by Armand’s unkind nature. In contrast with Madame Valmondé’s positive outlook on God and destiny, Armand assumes that God is punishing him “unjustly.” Armand sees his child’s heritage as a “cruel” and intentional curse from God. His love for his child is thus entirely conditional, just as his love for his “beloved” wife has been revealed to be. This assures readers that Armand’s earlier “change” in nature was, in fact, temporary.

"A quick conception of all that this accusation meant for her nerved her with unwonted courage to deny it...."  See in text (Désirée's Baby)

When the narrator says that Désirée considers “all that this accusation meant for her,” it is suggested that Armand assumes that Désirée is either part African American or has had an affair with an African American man. Notice the irony in this sexist accusation. Armand can have relations with an unwilling slave, but even the idea of Désirée having an affair disgusts him. Further, as a man, Armand is never asked to defend his heritage, while Désirée immediately must do so.

Désirée’s claim that she is so happy that it frightens her ought to give readers pause. We have learned of Armand’s passion and cruel treatment of his slaves, and so this sudden change in behavior is at odds with how he has been characterized previously. That the change scares Désirée gives us an indication that it may not be permanent. However, her love for Armand and the baby blind her to the truth about her husband’s character, and she remains hopelessly idealistic, believing that he could never turn his cruelty on her.

Although La Blanche never appears in the story, her name is mentioned quite often. Here, the narrator tells the reader that Armand has been at La Blanche’s cabin, implying that Armand has or has had a sexual relationship with her. Because La Blanche is Armand’s slave, she is deemed his “property,” and it was common at this time for slave-owners to rape their slaves. This introduces the theme of intersectionality in the short story, a concept that examines oppression from various social, political, economic, and racial perspectives.

Notice that Désirée is standing by the same stone pillar when she meets Armand. The stone pillar thus also symbolizes the various transitions that Désirée experiences throughout her life. Under this stone pillar, Désirée was given her first home, and now that she has won the affection of Armand, Désirée will move to a new home once again. However, consider how Désirée is a passive bystander, claimed by others during both of these transitions. Her quiet and passive role in both situations emphasizes the position of women in society at this time.

"seeing that she was without child of the flesh..."  See in text (Désirée's Baby)

When Madame Valmondé finds Désirée, she sees Désirée as a gift and blessing from God. Rather than taking her to an orphanage, she raises her as her own. Notice that Madame Valmondé’s interpretation of the situation ultimately decides Désirée’s fate. Had Madame Valmondé not attributed the child’s circumstances to God’s will, she might not have taken her in. This complicates the theme of fate and destiny, as Chopin suggests that our perceptions affect our decisions and their subsequent outcomes.

In the Christian doctrine, “providence” means divine guidance or care. In this context, it is associated with the concept of destiny, suggesting that it was God’s plan that the Valmondés find Désirée and adopt her. This establishes the theme of fate and providence that will appear throughout the rest of the story as characters blame or thank God for their circumstances.