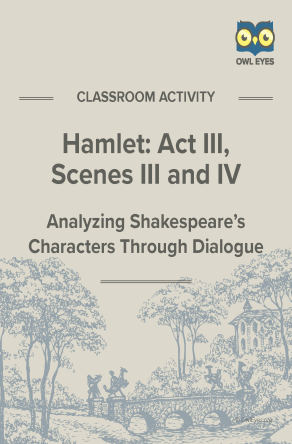 Arguably Shakespeare’s greatest tragedy, Hamlet addresses regicide and its terrible consequences. As the prince of Denmark and heir to the throne, Hamlet returns home from Wittenberg to find that his father, King Hamlet, has died and his mother, Queen Gertrude, has married Claudius, the king’s brother, who now rules Denmark as an illegitimate but powerful monarch. Intensifying Hamlet’s shock and horror is learning that Claudius murdered King Hamlet to usurp the throne and satisfy his lust for Gertrude. Grieving for his beloved father and despising Claudius, Hamlet is driven by the need to avenge his father’s murder and by his conflicting feelings about Gertrude; he loves his mother but condemns her for marrying Claudius almost immediately after his father’s death. The toxic relationships among Hamlet, Claudius, and Gertrude developed throughout the play are underscored in act III, scenes III and IV, when Hamlet secretly observes Claudius in prayer and later confronts Gertrude in her bedchamber to unleash his fury over her betrayal of King Hamlet and their marriage. In these scenes, Claudius’s and Gertrude’s characters, as well as Hamlet’s, are revealed more fully.

Learning Objectives: By using this worksheet, students will be able to

The Owl Eyes Dialogue Analysis activity for Hamlet gives students an opportunity to practice examining and analyzing passages from one of Shakespeare’s most popular plays. This worksheet focuses on the essential role of diction (word choice) in creating mood and subtext in each scene, developing characters, and establishing events in the plot. The main components of this activity include the following: