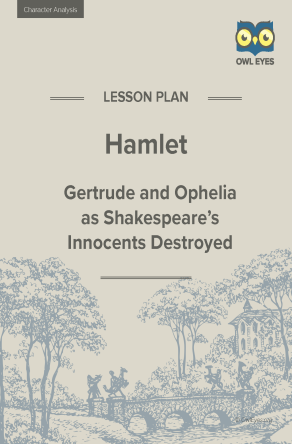 This lesson plan focuses Gertrude’s and Ophelia’s roles as innocent, tragic victims in Hamlet who succumb to the demands of their society and the deadly forces in Claudius’s court. Students will contrast their positions in the court, describe their relationships with Hamlet, Claudius, and Polonius, and analyze examples of Gertrude’s and Ophelia’s actions that are determined by the gender roles society expects them to conform to in their relationships with men. In studying Gertrude’s and Ophelia’s characters, students will be better able to describe how gender roles affect these women, how political intrigue destroys them, and how their tragic lives underscore a major theme in the drama.

Skills: Among those innocents drawn into the deadly political intrigue of Claudius’s court, none suffer more than Gertrude and Ophelia, whose tragic lives emphasize a major theme in Hamlet.

Critical analysis and literary interpretations of Hamlet typically focus on Shakespeare’s protagonist, the tormented Prince Hamlet who seeks to avenge the murder of his father, the king of Denmark. Also subject to much analysis and interpretation is Hamlet’s antagonist and uncle, the vile Claudius, who commits regicide to usurp the throne and marry Gertrude, his brother’s widow, to make her his queen and satisfy his lust for her.

The deadly enmity between Hamlet and Claudius and their plotting to destroy each other dominate the play, driving the plot and drawing other characters into their political intrigues. Some members of Claudius’s court willingly assist him in his schemes; others are unwittingly ensnared in various plots. None of them, however, escape the consequences of Hamlet’s and Claudius’s mutual hatred and deceit. Ultimately, they all suffer, and many of them die.

Among those who are unwittingly drawn into the political intrigue in Claudius’s court are Gertrude and Ophelia, the only two women in the play. Quite different in age and social rank, they are similar in ways that are not immediately obvious but become evident as the plot unfolds.

Primarily, their similarities are rooted in their gender; as women, regardless of their positions in Claudius’s court, they are essentially powerless to think or act independently and publicly; instead, they fulfill the roles society demands of them—being subservient, loyal, and loving to the men whose actions determine the course of their lives. Ironically, Ophelia’s one act of independence is to take her own life, but her suicide is the result of melancholy rather than rebellion.

As Claudius’s court disintegrates into violence and bloodshed, Gertrude and Ophelia remain unaware of the secrets coursing through it. As a result, they become innocent, tragic victims destroyed by the malignant forces unleashed at court by the men they love.