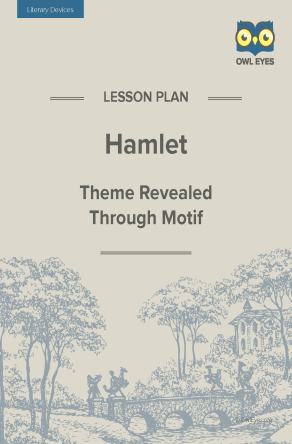 This lesson plan focuses on Shakespeare’s use of motif in developing an important theme in Hamlet. Students will examine deception as a major motif in the play and interpret what Shakespeare suggests about adopting deceptive behavior to resolve conflicts. Students will focus on Hamlet and Claudius in analyzing and describing examples of deception and will determine the ultimate consequences of their choosing to deceive others. In studying deception as a motif, students will be better able to identify and describe a major theme in the play.

Learning objectives: By the end of this lesson, students will be able to

Hamlet, the tragic hero of the play that bears his name, is arguably Shakespeare’s most complex character.

In tracing Hamlet’s emotional and psychological condition through five acts, the play generates more questions about him than answers, creating such ambiguity in his character that the tormented Danish prince has inspired conflicting literary interpretations for centuries. The primary question unresolved in the play concerns Hamlet’s mental state: is he pretending to be mad, as he contends, to deceive Claudius and his court while preparing to avenge King Hamlet’s murder, or does he cross a line into genuine madness? Regardless of what drives Hamlet’s actions, however, his behavior is rife with pretense and deception.

The psychological torment Hamlet endures is intense, making it impossible to rule out the possibility that he loses his grasp on sanity. Hamlet’s learning that his father, King Hamlet, had been murdered by the vile Claudius, who then usurped the throne, forces the young prince to resolve a conflict that defies a solution consistent with his personal feelings, religious beliefs, and the expectations of his society. Hamlet is honor-bound as a loyal, loving son and legitimate heir to the throne to avenge King Hamlet’s murder and punish Claudius’s regicide, the most heinous of crimes; to satisfy what he expects of himself and what the mores of his society demand of him, he must kill Claudius. Decisive action, however, eludes Hamlet, who fears that his killing Claudius will endanger his own soul, for murder is a mortal sin. Overwhelmed by grief and rage and paralyzed by introspection and indecision, he is trapped, unable to free himself from his misery even by committing suicide, because “self-slaughter” is also a mortal sin.

Unable to act decisively in resolving his dilemma, Hamlet pursues one clever scheme after another, deluding himself into believing that he is, in fact, taking action while he merely postpones resolving his conflicts. His various schemes are all rooted in deception—creating a false appearance that belies the truth of what he is thinking and feeling and masks his intentions. In this regard, Hamlet acts in a way that is consistent with the behavior of King Claudius. Claudius also resorts to deceit in addressing conflicts, primarily his conflict with Hamlet, whom he considers a threat to keeping the throne he has usurped. Hamlet’s and Claudius’s various acts of deception drive the plot and create an atmosphere at court that is rife with danger and intrigue. As the plot unfolds, the consequences of their deceptions become increasingly evident and culminate in the play’s tragic conclusion.