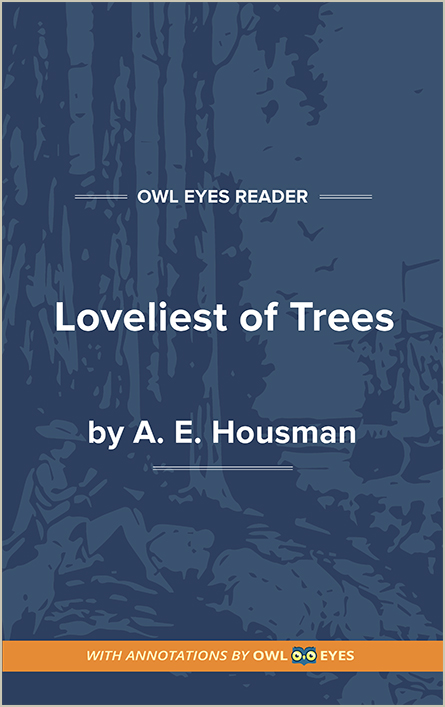 Historical Context in Loveliest of Trees

A.E. Housman was a Latin and Classics professor who published only two collections of poetry. His poems often centered around time and the inevitability of death. The speaker uses multiple Christian allusions. However, in his musings about death, the speaker does not contemplate a Christian heaven or afterlife. Rather, he focuses on the present moment which gives rise to the carpe diem theme of the poem. Housman’s poetry was an extension of the Romantic movement in England in the early nineteenth century, focusing on nature and the transcendence of it.

This is the superlative form of the adjective “love.” When an adjective takes this form, it indicates that there is nothing that can compare with its particular quality; it is the exemplary form. For many poets and writers, the subject of loveliness or beauty has been explored through mortality or transience. Housman follows suit in this poem by choosing the cherry as the “loveliest of trees” because their flowering season is very short, emphasizing this idea of beauty as passing.

In the Christian tradition, “Eastertide” lasts from Easter Sunday at the beginning of April to Pentecost, seven Sundays after Easter. The reference to Easter suggests the speaker’s Christian backdrop and hints at the Biblical connotations of the following line. However, notice that the speaker never contemplates the afterlife or God as he contemplates beauty and mortality.

This final conclusion suggests that Housman’s poem is a carpe diem poem. The speaker realizes that his time on earth is limited and chooses to embrace life to its fullest rather than sink into despair. Like many other carpe diem poems, Housman’s narrator understands the brevity of his life through nature and the beauty of spring. However, Housman deviates from this common theme in his tone. While other carpe diem poems focus on images of winter, decay, and death, this poem focuses on the awesome beauty of these trees in this particular moment. In this way, it embodies the form in a new way: the speaker lingers on this exact moment instead of his eventual decay.