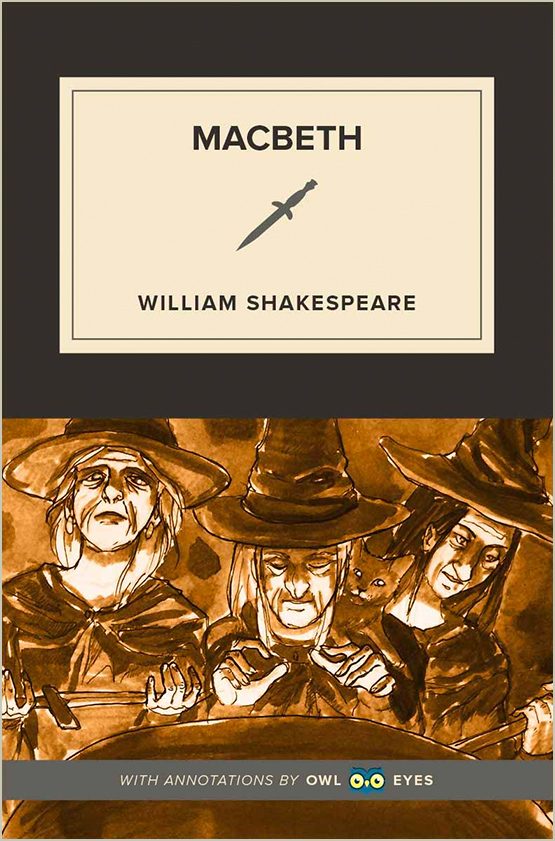 These words contain a subtle accusation: Banquo tells Lady Macbeth that her response is not appropriate because she should be more worried about the dead king rather than how it would affect her reputation. He also has reason to suspect that Macbeth committed the crime since he is aware of the witches' prophesies.

To put something to someone's bosom means to entrust someone with a charge or command. In this case, Macbeth states that if the murderers possess the necessary qualities, then he will give them this task. Also, notice how he subtly mocks the murders by implying that they are not men—"bosom" has connotations connected to femininity—to get what he wants, which is reminiscent of what Lady Macbeth did to him in earlier scenes.

By "strange invention," Macbeth is most likely alluding to reports that the princes have been circulating that he murdered Duncan instead of them. The word choice here allows Macbeth to make such reports sound completely false and almost ridiculously absurd—which, he would be keen to do.

The choice of the word "lated" (belated) means that the traveller is running a little behind schedule. Notice how the words "to gain the timely inn" suggest that the traveller has spurred his horse to make it move faster. The traveller doesn't want to be out on the highway after dark because of the danger from highwaymen.

The deed that Macbeth refers to is bloodshed and he says that they are not experienced enough with it. With this line, he fully indicates his intent to continue to kill others for the sake of his own security.

For reasons that are significant later on, it is important to note that by "woman born" the Second Apparition means someone born naturally. Macbeth understands this apparition's prophesy to mean that no naturally born man has the power to harm him.

The witches refer to Macbeth as "something wicked" rather than "someone." Considering how much he has given himself to evil, even stating that he has given his own soul to the devil, even the witches now regard him as simply a thing of evil.

"when we are traitors And do not know ourselves..."  See in text (Act IV - Scene II)

By "ourselves," Ross means that they do not know one another. Because of Macbeth's spy network throughout the country, it's likely that many innocent and good people have been denounced as traitors, and this would make everyone suspicious of each other. This line helps to reaffirm the tyrannical qualities of Macbeth's leadership.

Lady Macduff means that even though she believes Macduff took no direct actions that revealed him as a traitor, the fact that he ran away in fear makes it seem as if he were a traitor to others.

Even though Macbeth has the title of "King," Macduff calls him an "untitled tyrant" to reaffirm the notion that Macbeth is not a legitimate successor to Duncan's throne and is therefore not a true king.

Notice how Macduff and Malcolm both refer to Macbeth as black, evil, and a devil. Shakespeare likely used these particular words for the express purpose of giving the rebellion against Macbeth a moral and religious component. Macbeth is not just a bad king; he is an agent of the devil. This means that Malcolm and Macduff have God and righteousness on their side.

"All the particulars of vice so grafted..."  See in text (Act IV - Scene III)

Malcolm starts to tell Macduff all the reasons why he is unfit to be king. His motivations for doing this are shortly revealed, but in this instance he states that his vices will be worse than Macbeth's when revealed. The connection with "open'd" as revealed is compounded with the idea that the "grafted" vices will one day grow into very real problems.

Angus states that mutiny and the tyrannical rule of Macbeth have revealed him for what he is. This descriptive line reveals that the nobles all know that Macbeth committed the crimes against Duncan and Banquo because they stick to his hands—he cannot pin their murders on others anymore.

Shakespeare uses an abstract, plural noun to show how multiple people are affected by the quality or feeling that the noun denotes. In this instance, even though they have a common target for their revenge, they are all affected differently and have different motivations for pursuing their revenge.

Macbeth declares that this approaching battle will forever give him peace of mind or remove him from the throne. The use of the word "push" here adds to the finality of the statement; that the English forces have one opportunity to dethrone Macbeth.

Since he follows this word with "let them fly all," Macbeth's reports detail the revolt of his subjects. Notice how different his attitude is in this scene: no longer does he worry about threats or troubled sleep; his stubborn belief in the witches' prophesies have reinforced his will to fight to the end.

Many critics have contended the meaning of this line, whether Macbeth is callously indifferent to his wife's death or whether he is so sunk in misery by the news that he finds life not worth living. Perhaps the most plausible reading of this is connected to the latter and that Macbeth wishes that she had died after the battle, when there would have been time to mourn her properly.

The word "should" can be misleading for many modern readers. Macbeth does not mean that he would have preferred to have his wife die later, that she "ought to" have died hereafter, or that it would have been more convenient if she had died later. He is using the subjunctive mood, which is gradually disappearing from the English language. According to the article in Wikipedia on "Subjunctive":

The subjunctive is a grammatical mood found in many languages. Subjunctive forms of verbs are typically used to express various states of unreality such as wish, emotion, possibility, judgment, opinion, necessity, or action that has not yet occurred; the precise situations in which they are used vary from language to language. The subjunctive is an irrealis mood (one that does not refer directly to what is necessarily real) – it is often contrasted with the indicative, which is a realis mood.

A modern American would say:

Macbeth is not showing the slightest concern about his wife. No doubt he once loved her, but it seems as if he has no love for her at all anymore. In fact, he probably hates her because she talked him into killing King Duncan when he really didn't want to do it. If he hadn't listened to her he could now be enjoying a comfortable and honorable old age. He holds her responsible for the mess he is in. Their marriage has evidently fallen apart. The fact that they share the same guilt does not bring them together but drives them apart. Each reminds the other of their shameful deed. Everybody in Macbeth's kingdom hates him. He will probably lose the coming battle with the English army, in which case his own death is inevitable.