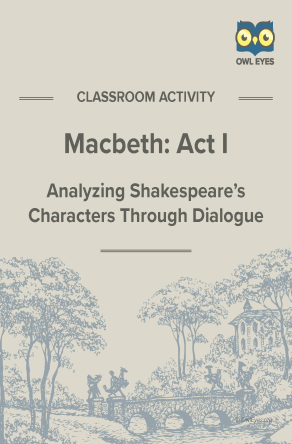 This Owl Eyes Dialogue Analysis activity for Macbeth gives students an opportunity to practice examining and analyzing passages from one of Shakespeare’s most popular plays. This worksheet focuses on the essential role of diction (word choice) in creating mood and subtext in each scene, developing characters, and establishing events in the plot. The main components of this activity include the following:

The unforeseen, inexorable consequences of ruthless ambition is a frequent theme in Shakespeare’s tragedies, but in none of them is the theme more prevalent than in Macbeth. A courageous general and Scottish nobleman loyal to King Duncan, Macbeth succumbs to personal ambition to steal the crown. Spurred on by his cold, calculating wife, Lady Macbeth, and by the deceptive prophecies of three witches, Macbeth murders Duncan, assumes the throne of Scotland, and subsequently commits other vile, murderous acts to remain king. Macbeth’s initial corruption as he is tempted and then overwhelmed by ambition is the subject of act I. In several brief scenes, Shakespeare establishes how Macbeth’s desire for the crown is aroused, how the thought of murdering Duncan initially repels him, and why he ultimately commits to killing the king; in these scenes, the characters of Macbeth, Lady Macbeth, Duncan, and Banquo (Macbeth’s peer and a fellow general) are introduced.