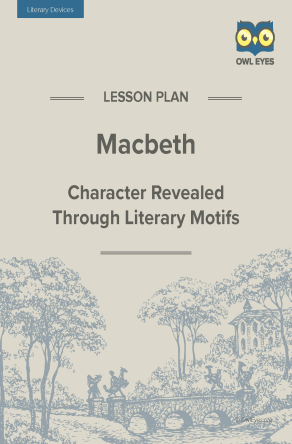 This lesson plan focuses on Shakespeare’s use of literary motifs in developing the character of Lady Macbeth. Students will examine several motifs in the play and analyze what they reveal about her and how they contribute to symbolism and theme in the drama. In studying the motifs, students will be better able to describe the dynamic nature of Lady Macbeth’s character, her psychological and emotional disintegration at the play’s conclusion, and how her destruction contributes to themes in the play.

Macbeth, the courageous general destroyed by his ambition to rule Scotland, is the central character in Shakespeare’s tragedy and generally the primary focus of literary analysis of the drama.

Lady Macbeth, however, who is instrumental in Macbeth’s murdering King Duncan and assuming the throne, is as complex a character, as villainous as her husband, and arguably more responsible than he is for Duncan’s death. Even more ambitious than Macbeth and unrestrained by loyalty, compassion, or principles of moral behavior, Lady Macbeth feeds his ambition, carefully plans the king’s murder, and manipulates Macbeth into committing it when he has a change of heart. She appears to be unaffected by the horror of Duncan’s being slaughtered in his sleep and by the ensuing horrors that unfold following his murder.

As the play concludes, however, Lady Macbeth apparent imperviousness to the results of her and Macbeth’s treachery proves to be an illusion. Ultimately overwhelmed by fear, guilt, and remorse, she commits suicide. The contrast between Lady Macbeth’s character at the beginning of the play and in the conclusion is a striking indication of the psychological and emotional disintegration that occurs within her as her character is developed. Her destruction, as well as Macbeth’s, contributes to major themes in the drama.

Worksheet Excerpt From the Lesson

Confer with others in your group while you complete this activity. Discuss the questions and the passages, and refer to the text as you work through the handout. Support your answers with details from the text.

I. Sleep Motif (Act II, Scene ii) After murdering King Duncan, Macbeth is in a highly disturbed state. He reports to Lady Macbeth that he heard a voice cry “Glamis hath murdered sleep, and therefore Cawdor / Shall sleep no more: Macbeth shall sleep no more.”

Give me the daggers. The sleeping and the dead Are but as pictures. Tis the eye of childhood That fears a painted devil. If [Duncan] do bleed, I’ll gild the faces of the grooms withal, For it must seem their guilt.

How does she seem to feel about Duncan’s dead body and his blood? What words would you use to describe her attitude about them?

What does her statement imply regarding her attitude about having committed a bloody murder?

III. Sum it up

Write a sentence or two describing what is revealed about Lady Macbeth through the motifs of blood and sleep in act II, scene II.