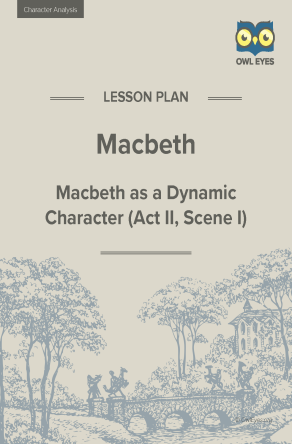 Macbeth as a Dynamic Character in Act II, Scene I

This lesson plan focuses on how Macbeth develops as a dynamic character in regard to the internal conflict he experiences in murdering King Duncan. Students will work with Macbeth's soliloquy at the beginning of act II, scene I as he anticipates the moment when he will kill Duncan. In studying the soliloquy, students will be better able to describe and explain Macbeth's mental and emotional state prior to committing the heinous act that violates his conscience.

Shakespeare’s Macbeth delves into the world of darkness, chaos, and conflict that arises when one’s lust for power usurps the moral order.

One of Shakespeare’s most compelling dramas, Macbeth chronicles the downfall and destruction of a courageous, once highly respected general in the army of King Duncan of Scotland. The play is often noted for the role of the “weird sisters,” witches with evil intent and mysterious supernatural power who scheme to destroy Macbeth, the noble general, by first arousing his desire for the crown and then feeding his ambition through clever, misleading prophecies.

The heart of the drama, however, is Shakespeare’s characterization of Macbeth, a tragic hero destroyed by a fatal flaw in his own nature. In developing Macbeth’s character by tracing his downfall and portraying his ultimate fate, Shakespeare raises questions about good and evil, conscience and corruption, and the weaknesses inherent in humanity.