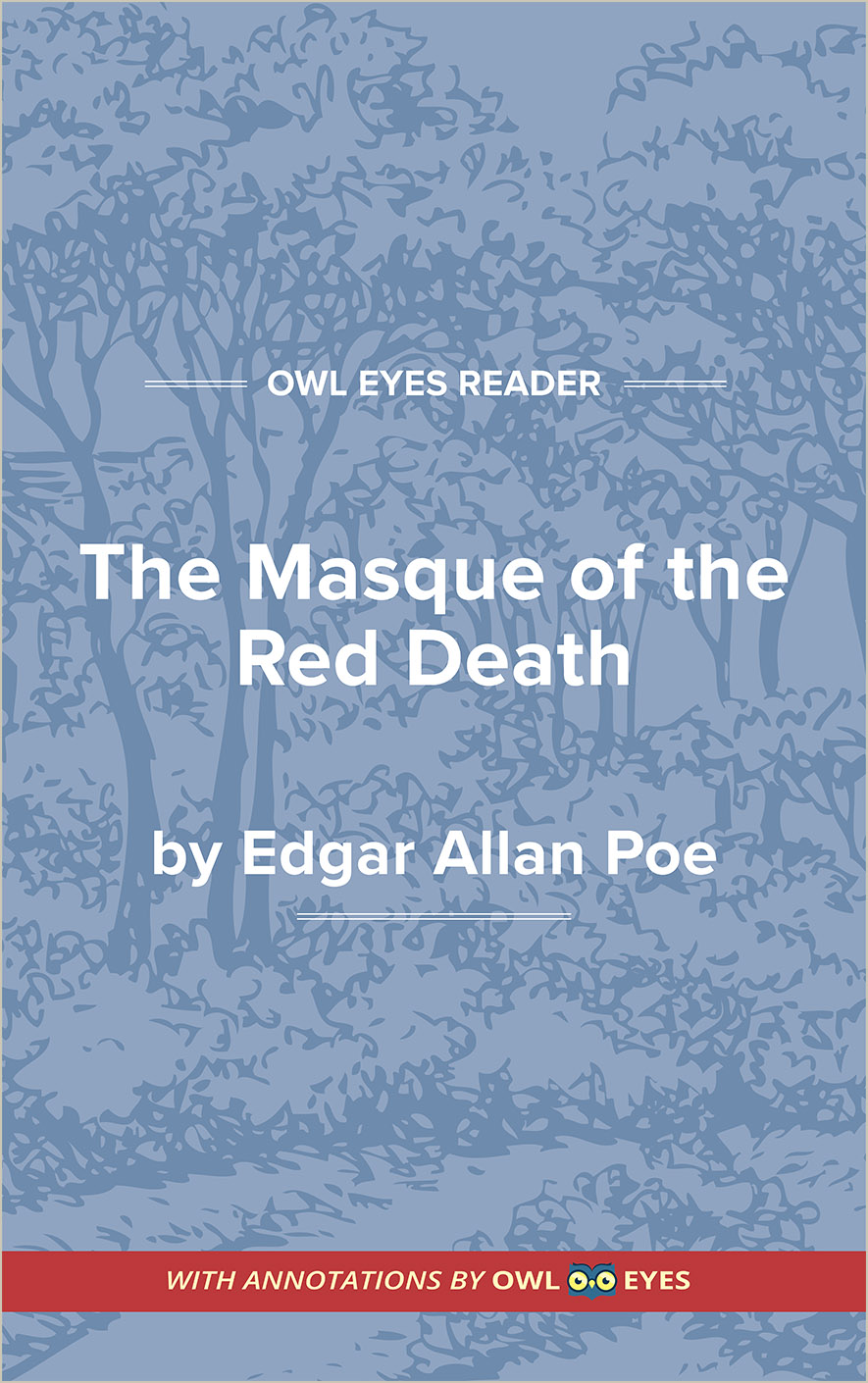 Symbols in The Masque of the Red Death

The Clock: The ebony clock represents time, specifically as it relates to death. As the masquerade goes on, the guests become increasingly aware of the passage of time, counting every second of each hour and halting their activities every time the clock chimes. Despite their attempts to escape the Red Death, the clock reminds Prospero and his friends that their revels must come to an end, as the clock counts down to the inevitable arrival of death.

Colors and the Rooms: The visual landscape of “The Masque of the Red Death” is full of color, with red being the most prominent. Red and black are common color schemes in Gothic horror: red is the color of blood, and black is connected with death and disease through its historical association with the Black Death. Combined, they establish an eerie atmosphere. By contrast, blue is the color of clear skies, an image associated with birth and renewal. The rooms in Prospero's castle are arranged from east to west, following the path the sun takes across the sky. The movement of the sun is a common metaphor for the stages of life. The black room is the westernmost point of the suite, symbolically linking it with night and, in the context of the metaphor, death.

Symbols Examples in The Masque of the Red Death:

The Masque of the Red Death

"And the life of the ebony clock went out with that of the last of the gay...."  See in text (The Masque of the Red Death)

In Christian trinitarian doctrine, the spirit of God is split into three distinct but interconnected vessels: the Father, Son, and Holy Spirit. The Father is the creator of the universe, the Son is embodied by Jesus Christ, and the Holy Spirit dwells in the faithful. In “The Masque of the Red Death,” the clock, the masked figure, and blood serve as an unholy trinity, representative of death rather than salvation. The clock is time, the indomitable presence that establishes the confines of reality and the inevitability of death. The masked figure is the dark judge who brings death to Prospero and his friends. Blood, established as an enemy from the start, is the source of the pestilence that led to Prospero’s arrogance and eventual downfall. Once the last of the masqueraders has died, the trinity dissolves, with the masked figure's proving intangible, the clock's ceasing to tick, and the blood's splattering the walls.

"whose tall figure stood erect and motionless within the shadow of the ebony clock,..."  See in text (The Masque of the Red Death)

"reddened with rage...."  See in text (The Masque of the Red Death)

Up to this point, the color red has been associated with death and disease. If readers maintain this association, Prospero’s face “redden[ing] with rage” can be interpreted in multiple ways. Recall that one of the symptoms of the red death is “profuse bleeding at the pores.” Though possible that Prospero’s anger has caused his face to flush, there is still an echo of the description of facial bleeding from the introduction of the disease. By another reading, Prospero’s own murderous thoughts have led his face to take on the color of death. He calls for the hanging of the figure and later rushes him with a dagger, indicating Prospero’s own deadly nature.

"the more aged and sedate passed their hands over their brows as if in confused reverie..."  See in text (The Masque of the Red Death)

A “reverie” is a daydream, typically a pleasant one removed from the stresses of reality. Prospero’s castle, with its willful ignorance of the outside world, is like a daydream. Prospero and his companions can pretend that death does not exist and instead enjoy the luxuries of their health and riches. The clock intrudes on their collective “reverie,” a physical testament to time’s passage and the encroachment of death. The “more aged and sedate” masqueraders likely feel the impact of the passage of time more strongly than the young and lively, thus their confusion as the reality of time’s passage collides with the daydream that Prospero has created.

"a gigantic clock of ebony...."  See in text (The Masque of the Red Death)

In Shakespeare’s sonnet sequence, Sonnet 12 conflates Time with the grim reaper: “and nothing 'gainst Time's scythe can make defence…” That the clock is located in the black room establishes a relationship between death and the passage of time, increasing the unease of Prospero and his friends. Every tick of the clock is a reminder that they are one step closer to death. As a result, the masquerade transforms into a tense and nervous scene as the looming presence of death intrudes on Prospero’s fabricated reality.

"But in this chamber only, the color of the windows failed to correspond with the decorations. The panes here were scarlet—a deep blood color...."  See in text (The Masque of the Red Death)

The presence of the black room suggests the inevitability of death, but the inclusion of the “blood red” window panels serves as a reminder that death is not divorced from life, but rather a natural part of it. Blood, which is the “Avatar and seal” of the Red Death, is a vital component of life. No amount of walls or iron gates can protect people from their own bodies. Though “The Masque of the Red Death” casts death as gruesome and villainous, it also highlights the foolishness of those who try to escape it.

"That at the eastern extremity was hung, for example, in blue..."  See in text (The Masque of the Red Death)

The rooms are ordered from east to west, matching the sun's path across the sky, beginning with blue and ending with black. The course of a day is a common metaphor for the transience of life. The color blue, associated with the sky, can represent vitality and the start of a new day. Black is commonly associated with death and night. The ordering of the rooms can be read as a metaphor for the stages of life, with blue representing birth and black representing death.

The most common element on Earth, iron is a frequent symbol of vitality and protection in folklore. When humans discovered that iron could be extracted from veins in the ground, it became a symbol for the lifeforce of the earth. It is considered the most human metal and is thought to be able to repel ghosts and other supernatural entities. Most graveyards are built with iron gates in order to prevent the spirits of the dead from getting out, providing a sense of separation between the living and the dead. Prospero and his friends built the gate to keep death out, but now they are the ones who are fenced in.

On top of building the visual landscape of the “The Masque of the Red Death,” Poe includes color for symbolic purposes. The title and introduction directly associate “redness” with death and disease. Historically speaking, red is either the color of power and vitality or the color of fear and danger. Its associations with blood are likely what leads to this conflict, since blood is associated with both life and death. Though the narrator primarily uses red to represent death, its associations with blood and vitality serve to remind readers that life and death are irrevocably connected.